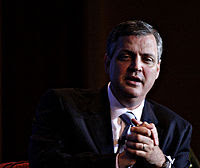 Wade Burlson, one of the more important "Baptist Bloggers" who are changing the life of the Southern Baptist Convention (SBC), does not think that Al Mohler should be voted in as president of the SBC. Here's some of what Wade has written:

Some have expressed fear of Mohler's Calvinism, but it his Fundamentalism which should cause pause when it comes to electing Al as President. Whereas Al could argue Calvinism is based upon an interpretation of the sacred text, it is more difficult to deny his Fundamentalism is based on additions to the sacred text. For example, Al has called intentional childlessness moral rebellion. Chapter and verse from the sacred text are not used for such pontifical pronouncements, and we Southern Baptists should always quickly question moral standards that exceed the sufficient Scriptures. Further, when one's orthodoxy (doctrine) contradicts one's orthopraxy (practice or behavior), confusion arises. For instance, in arguing for the moral pronouncement that intentional childlessness is rebellion against God, Mohler writes:

"To demand that marriage means sex--but not children--is to defraud the creator of His joy and pleasure in seeing the saints raising His children."

Last time I checked only outright Socinians and Open Theists - not orthodox Calvinists - believed God intends to create children but is defrauded by the saints. Orthodoxy would say that God is as sovereign over the means as He is the ends. Is it not possible that a soverereign God actually had a hand in inventing contraception? Most Calvinists I know would agree. But when Calvinism weds herself to Fundamentalism a conundrum is born.

As regular readers know, I am quite a critic of Al Mohler. In my opinion, Mohler does not practice Sola Scriptura and binds the consciences of believers with human teaching, such as the belief that drinking alcohol is always sinful, that couples who are deliberately childless are somehow sinning (as per Wade's complaint above) and that torturing terrorist suspects is not sinful.

To read my previous Al Mohler posts, click on the Al Mohler tag below.
Posted by Neil Cameron (One Salient Oversight) at 21:42

I have just stumbled across your site and based on this posting it is clear that you have not really studied Dr. Mohler. You are also full of contradictions. If you seriously think that Calvinism has no Biblical warrant then how do you explain God having control over creation and God saving anyone. God chose to redeem his people some that one must believe to be a Christian and is a starting point for Calvinism. Lastly, you imply that Mohler is a open theist. You are just flat out wrong on that. Listen to his radio show and read his blog. You will see that although you might not agree with the man all the time you must respect him. Not only for what he did at Southern Seminary but for the simple fact that he standing in the gap and trying to convey Biblcial truth to an unbiblical society.

It's actually quite clear that you didn't read the post properly. I never said Mohler was an open theist - it was the quote from Wade Burlson that hinted at that, which was more in line with the idea that Mohler was being inconsistent rather than being an open theist.

And as far as me saying that Calvinism has no biblical warrant... where did I say that? If you read my FAQ you'll see that I'm a five-pointer.

The reasons I don't like Mohler are simple - he thinks drinking alcohol is sinful and torturing terrorist suspects is okay.