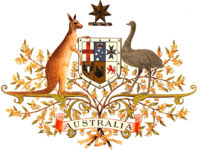 Today is Australia Day. For non-Australian readers you might think this includes Australians waving around little Australian flags, attending patriotic street parades and pledging our lives for the country. No. Doesn't work like that here.

It's a Saturday, so the shops are still open and we'll be doing some shopping today. People who live near the coast will probably have a swim. There's no family get-togethers (no more than normal), no air shows (although an F/A-18 might fly over Sydney to impress the small crowd of people there).

It was 220 years ago that a group of British Settlers and a whole bunch of convicts turned up in Port Jackson to begin modern Australia. Australia has never had a war of independence and we have never had a civil war (though that was touch and go in the early 19th century).

Australia day is traditionally the end of Australia's holiday season. January is the hottest time of year and the Christmas and New Year holidays basically merge with the extended Summer School Holidays. Australia Day marks the end of this holiday season. On Tuesday or Wednesday next week Aiden will go back to school (he'll be in year 2) which means that pretty much everyone will be going back to work.

Perhaps the most important annual celebration Australia has - and one which does sort of rally us as a nation - is ANZAC Day. On that day (25 April), Australia (and New Zealand) celebrate the first time our nation went to war (The invasion of Gallipoli in 1915). For some reason, this day is more important - far more important that January 26th and more important even than Federation Day (January 1st). ANZAC day is the day of the year where we honour our previous and current members of the military, and is the closest thing we get to American style patriotic ceremonies.

But today is Oz day. Our family is doing nothing special. Anna is walking down to the shops to buy a few things, and I'll be driving out later to get some prescriptions for ourselves and for my Mother in Law. If Anna is feeling good (she has a bad back) we might go down the beach this arvo. In other words, today is no different to any other lazy summer day we have spent in the last 3 weeks. I'm certain the vast majority of Australians have similar lazy plans.
Posted by One Salient Oversight at 10:19

Pretty good summary Neil. We're a laid back lot really. We get a public holiday for Australia day.

The best Australia day we had was 2 years ago when Harry finished his chemo tablets after 2 years of chemo. That meant there was no more "food curfew" or "No food zone" after dinner before bed.

So we went to a park in North Ryde where people had flags, listened to a kids music and dance thing, listened to a BG's impersonator group, and watched some fireworks. I can't even remember if we sang the national anthem at any point! (That's "Waltzing Matilda" init?)

I like the Australian Anthem to the music of "Working class man". That works well, you ever heard that?

Australia Day sounds like no big deal the way you describe it, but let me wish you all a Happy one anyway.

Neil,
have you ever done Australia day? It might be a bit of a day home for many Australians, but in the big cities it can do a bit more... especially in Sydney.

We even had a re-enactment of the Rum Rebellion in town, in Red Cloaks and all.