Paul McGuinness is trapped in a previous business model 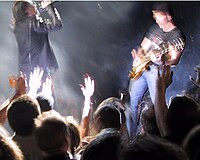 The long-time manager of rock band U2 has lashed out at internet providers for resisting calls by the music industry to pull the plug on users who illegally download songs.

At a music industry conference in France, Paul McGuinness said internet service providers (ISPs) and technology companies had "enjoyed a bonanza" in the last few years by accepting fees from illegal downloaders while doing nothing to prevent them from stealing music.

"Their snouts have been at our trough feeding free for too long," said McGuinness, who has managed U2 for 30 years and is a highly respected industry figure.

In Australia, and more recently overseas, ISPs have resisted growing pressure from the music industry to send warning notices to customers who have been identified as illegal downloaders, and disconnect the services of repeat offenders.

Technology has changed the music industry. The old business models are out, the new ones are coming in. File sharing has made recorded music virtually free to copy, and there is precious little the industry can do any more to reverse this situation.

Bands like Radiohead and The Charlatans have begun to utilise an entirely new business model whereby their recorded music is made available for free. This may seem a strange unprofitable practice, but it has increased the popularity of some new bands, who are then able to use this popularity to increase the amount of live shows they perform and in the CDs they sell.

Back in the 60s when bands like The Beatles, The Rolling Stones and The Who were around, bands had to play upwards of 5 gigs per week in order to make money. As these bands became more popular, they began to play in bigger and bigger venues and could even afford to play less gigs. It was these conditions which helped to create the musical and financial basis of the music business. With file sharing now widespread, the conditions are quite ripe for a new type of music industry.

An example is my own experience. I recently downloaded the album Methodrone by The Brian Jonestown Massacre. I was able to do this at the band's own website - all their albums can be downloaded for free. I enjoyed what I was listening to. However the bitrate of the music files was only 60kbps, and I could discern a slight loss of quality. Having sampled this album I have since decided to purchase it in order to have my own "hard" copy which I can then use for my own use and listen to in its original high-quality format. In other words, making this entire album free to download has meant that I have handed over money to buy it.

Another example is that I have recently been listening to Last.fm, and have had the opportunity to download free tracks from two bands called The Dark Angels and The Warlocks. This has led to me again purchase their albums.

Sadly I sort of expected more from U2. We need to remember that it is Paul McGuiness - the band's manager - that is being a jerk here rather than Bono and the lads. Nevertheless I would have thought that the members of U2 would appreciate this new musical direction. If U2 released its entire music collection as free downloads they would gain a great deal more popularity and kudos as a result, not to mention packed concerts. They would probably lose more money than they gained from doing such a thing, but it's not as though the lads need extra cash to ease them into retirement.

Put simply, McGuinness is trapped in a previous business model. His entire life has been spent making money from a model that is now under threat. Rather than embracing change and the flexibility that comes with free downloads, McGuinness has essentially sided with big business. He wants a virtual Garda Síochána chasing down and prosecuting violators while the world passes him by. Very sad.

Posted by Neil Cameron (One Salient Oversight) at 18:13

Free ringtones for everyone.
Unique ringtone. Ringtones are attractive. Ringtones have nice melodies. Ringtones fun. Latest ringtone 2018. Do you have your favorite ringtone on your mobile phone? Want to change the ringtone? You can view my homepage for more references and search for other ringtones and leave a review for me here: https://bestringtonesfree.net/

This is the hottest ringtone in 2018, you can install by following the instructions:

If it comes to country music? What country would you think of? I will say is India. This country has a lot of good Bollywood music and movies. I love their music. I have collected free Indian songs here: Free ringtone downloads for cell phones

What better way when you install it for free. Here are the songs I listen to most often and get the most recent ones: