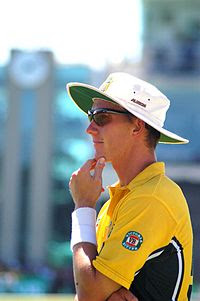 As I type this, Brett Lee's career bowling average is 29.98. Of course, when he resumes bowling again in Perth this afternoon (OSO time) the chances are that he will go above the 30 average again. The fact that he has broken this barrier, though, is important.

As many know, Lee is not my favourite cricketer. He is damn fast and he takes lots of wickets but he has been too expensive. He is, in fact, the most expensive Australian bowler who has taken over 20 wickets in his test career, having an average of 3.52 runs per over taken off him since he debuted in December 1999. He has taken 263 wickets in that time, and all the other bowlers who have taken similar amounts of Test wickets for Australia in that time have had lower averages and have been less expensive (in terms of runs per over).

Lee has, nevertheless, improved in the last 2 years. His bowling since the Australian tour of South Africa in 2006 has been very useful, which is reflected in his cumulative career statistics, which show a steady downward pressure on his bowling average and economy rate for the last few years.

If Lee can continue this performance I'll be happy to change my mind about him, although doubts will certainly remain.

Posted by One Salient Oversight at 12:14