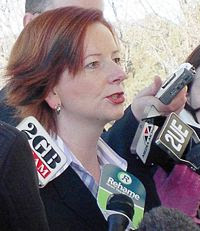 The Bureau of Meteorology came out with some important stuff today:

The Bureau of Meteorology says Australia experienced its sixth warmest year on record in 2007.

Some parts of the country reached the highest average temperatures ever recorded, including the Murray-Darling Basin, South Australia, New South Wales and Victoria.

One feature of the year was extremely low water availability, although a La Nina event in November brought rain to much of the country.

The bureau's climate analysis spokesman, Doctor David Jones, says the increase in temperature is part of the global warming trend.

"The standout year is 2005, which was Australia's warmest year on record, but essentially all the warm years that we've had have been in recent years," he said.

All true and all very important. New Australian Deputy PM Julia Gillard weighed in on the argument:

She says the statistics should silence climate change sceptics.

"What the bureau statement today confirms is the urgent need to act on climate change," she said.

"We know of course, we've seen 11 years of inaction from the Howard government. The Rudd Labor Government has already started acting on climate change."

Rubbing it in after victory is all very well, but Gillard - and Labor - need to realise that actions speak louder than words. So far the only thing the Government has done is sign the Kyoto accord and participate in a talk fest in Bali. As yet they have done little that is practical. Gillard's words would be far more effective once the ALP actually DO something about global warming.

Back in 1996, Howard and Costello basked in the glory of their victory and were quick to deride Labor's poor fiscal record. This was backed up by budget cuts and an eventual surplus. Their actions spoke along with their words. So far, Rudd and GIllard's government has done little yet. Give them time of course - for a very young government it is the only recourse - but I think statements of the type that Gillard makes are not helpful for anybody at this stage.

Posted by One Salient Oversight at 18:13

BTW are there sceptics on climate change - I thought the sceptics were on it being human caused.

Since the election I have seen Julia grinning everywhere perhaps it has not just not sunk in yet even though she has an overload of jobs.

Anyone heard of Kevin.
he was in Afghan on 24th talking about a long haul
and latest item I could see in SMH
was

For our PMs, there's just no avoiding the follow-on - at the Cricket 28 Dec - smh.com.au