The Church of Dunbar 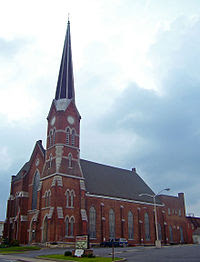 In the past I liked big churches. The bigger the better thought I. Large amounts of people both bring in the cash as well as provide more opportunities for efficient use of resources. I once attended a large church (700-800 people) for some ten years.

Now I don't like big churches, and the reason is biblical. The pastor of a church needs to have a relationship with those he ministers to - and by that I mean some level of relationship whereby a person has had a one-to-one conversation. The larger the church, the less likely it is that he can minister to them effectively at this level.

Titus 2.7-8 says Show yourself in all respects to be a model of good works, and in your teaching show integrity, dignity and sound speech that cannot be condemned.... These words were written about church leaders, and the idea of modelling godliness is something which is integral to those who would be pastors. If there are people in your church that you cannot "model" your godliness to, then that is a problem. Pastors therefore have a dual role in teaching - they teach in word as they preach, and they teach in action as they relate to people.

The problem is that the bigger the church (in terms of numbers of people), the less chance the pastor has in relating to people. Moreover, in modern churches there exists a "bureaucracy" of leadership whereby lower level leaders have the opportunity to "relate" to the ordinary church-goer while all the pastor needs to do is to "relate" to his staff and lay leaders. This is dangerous because it means that, firstly, the pastor does not understand or relate to ordinary church members, and, secondly, that those he does relate to are those who depend upon him for their position. In other words, the larger the church and the bigger the leadership bureaucracy, the less likely it is for the pastor to model good works and the more likely it is for ungodly leadership to develop.

And this is where Dunbar's number comes into play:

This quote (from Wikipedia) basically points out what we know in practice - that relationships become more difficult the bigger the group becomes.

Dunbar's number is not a biblically determined number. Even Dunbar himself would have argued that the 150 number is merely arbitrary and that other determinants like culture and age might influence it.

What Dunbar's number confirms for us is that large churches are not as good for the gospel as we might wish to believe. While tiny churches have problems of their own, we probably need to recognise that churches become ineffective at developing quality relationships once it goes beyond a certain size. Moreover, because relationships become less effective as the church grows larger, you could also argue that the church's ability to communicate the gospel to unbelievers is similarly affected.

In the same way we also need to realise that churches should have an "upper limit" that is not just determined by building size, but also by human relationships. The way the New Testament shows us is that pastors need to have positive relationships with church members in order for them to model godliness. While the NT doesn't give us Dunbar's number as a clear line not to cross, it is clear that anything which hinders both the pastor's natural relationships with his church members, and the church member's ability to relate to one another, would constitute a direction in which the biblical commands would be harder to keep.

In other words, the larger a church becomes, the harder it is for a church to maintain itself in a godly way. Churches should therefore seriously consider planting new churches once they reach a certain size, rather than moving into bigger buildings.

Update:
Ray informs me that my maths is wrong and he should know since he is a maths teacher. The formula should be r=(p x (p-1) ) / 2.
Posted by One Salient Oversight at 12:18

Good thoughts. You've touched on one of my biggest objections to large churches: the challenge of maintaining Biblical discipline. When there are so many people, it is very difficult for the leaders to know whether or not sin needs to be addressed in the lives of individual members.

Please note that the mathematical formula I gave was wrong. I have corrected it above.

Spot on there Beamer, although I would also argue that it cuts both ways - not only are members more likely to "get away with" sin, so is the pastor. Surely the congregation itself has a responsibility to keep their own pastor accountable.

I agree, but you had already mentioned the possibility for ungodly leadership to develop, so I didn't address that.

Couldn't agree more. I wrote about it HERE and HERE.

I'd like to know which church you are at, OSO. I did MTS in 92-94 in Newcastle in the early days of Hunter Bible Church (It wasn't called that then.)

PS. Paul Barnett responded to your comment on Craig's Blog.