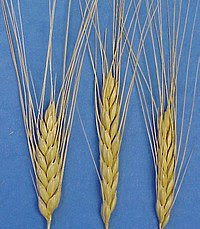 From the department of serious-problems:

Wheat futures for March delivery rose 30 cents, the most allowed by the CBOT, or 3.4 percent, to $9.15 a bushel. The price reached a record $10.095 a bushel on Dec. 17 as global demand eroded worldwide inventories.

Oil prices are one thing. Food prices are another. Although I believe that peak oil will increase agricultural costs, the amount of oil used to make pesticides, herbicides and fungicides represents less than 1% of total consumption, which means that plenty of (costly) oil should be available to keep our farms going.

Another reason why food prices have shot up may simply be the falling value of the US Dollar. But I'm not sure. Perhaps it may be that food production has reached a peak? In that case, expect starvation amongst the poorer nations.
Posted by One Salient Oversight at 09:42

The following article sums it up.

ROME: In an "unforeseen and unprecedented" shift, the world food supply is dwindling rapidly and food prices are soaring to historic levels, the top food and agriculture official of the United Nations warned Monday.

The changes created "a very serious risk that fewer people will be
able to get food," particularly in the developing world, said Jacques
Diouf, head of the UN Food and Agriculture Organization.

The agency's food price index rose by more than 40 percent this year,
compared with 9 percent the year before -- a rate that was already
unacceptable, he said. New figures show that the total cost of
foodstuffs imported by the neediest countries rose 25 percent, to $107
million, in the last year.

At the same time, reserves of cereals are severely depleted, FAO
records show. World wheat stores declined 11 percent this year, to the lowest level since 1980. That corresponds to 12 weeks of the world's total consumption -- much less than the average of 18 weeks
consumption in storage during the period 2000-2005. There are only 8
weeks of corn left, down from 11 weeks in the earlier period.

Prices of wheat and oilseeds are at record highs, Diouf said Monday.
Wheat prices have risen by $130 per ton, or 52 percent, since a year
ago. U.S. wheat futures broke $10 a bushel for the first time Monday,
the agricultural equivalent of $100 a barrel oil. (Page 16)

Diouf blamed a confluence of recent supply and demand factors for the
crisis, and he predicted that those factors were here to stay. On the
supply side, these include the early effects of global warming, which has decreased crop yields in some crucial places, and a shift away from farming for human consumption toward crops for biofuels and cattle feed. Demand for grain is increasing with the world population, and more is diverted to feed cattle as the population of upwardly mobile meat-eaters grows.

"We're concerned that we are facing the perfect storm for the world's
hungry," said Josette Sheeran, executive director of the World Food Program, in a telephone interview. She said that her agency's food procurement costs had gone up 50 percent in the past 5 years and that some poor people are being "priced out of the food market."

To make matters worse, high oil prices have doubled shipping costs in the past year, putting enormous stress on poor nations that need to
import food as well as the humanitarian agencies that provide it.

"You can debate why this is all happening, but what's most important to us is that it's a long-term trend, reversing decades of decreasing food prices," Sheeran said.

Climate specialists say that the vulnerability will only increase as
further effects of climate change are felt. "If there's a significant
change in climate in one of our high production areas, if there is a disease that effects a major crop, we are in a very risky situation," said Mark Howden of the Commonwealth Scientific and Industrial Research Organization in Canberra.

In Southern Australia, a significant reduction in rainfall in the past few years led some farmers to sell their land and move to Tasmania, where water is more reliable, said Howden, one of the authors of a recent series of papers in the Procedings of the National Academy of Sciences on climate change and the world food supply.

"In the U.S., Australia, and Europe, there's a very substantial
capacity to adapt to the effects on food -- with money, technology,
research and development," Howden said. "In the developing world,
there isn't."

Sheeran said, that on a recent trip to Mali, she was told that food
stocks were at an all time low. The World Food Program feeds millions
of children in schools and people with HIV/AIDS. Poor nutrition in
these groups increased the risk serious disease and death.

Diouf suggested that all countries and international agencies would
have to "revisit" agricultural and aid policies they had adopted "in a
different economic environment." For example, with food and oil prices approaching record, it may not make sense to send food aid to poorer countries, but instead to focus on helping farmers grow food locally.

FAO plans to start a new initiative that will offer farmers in poor
countries vouchers that can be redeemed for seeds and fertilizer, and will try to help them adapt to climate change.

The recent scientific papers concluded that farmers could adjust to 1 degree Celsius (1.8 degrees Fahrenheit) to 3 degrees Celsius (5.4 degrees) of warming by switching to more resilient species, changing planting times, or storing water for irrigation, for example.

But that after that, "all bets are off," said Francesco Tubiello, of
Columbia University Earth Institute. "Many people assume that we will never have a problem with food production on a global scale, but there is a strong potential for negative surprises."

In Europe, officials said they were already adjusting policies to the
reality of higher prices. The European Union recently suspended a
"set-aside" of land for next year -- a longstanding program that
essentially paid farmers to leave 10 percent of their land untilled as a way to increase farm prices and reduce surpluses. Also, starting in January, import tariffs on all cereal will be eliminated for six months, to make it easier for European countries to buy grain from elsewhere. But that may make it even harder for poor countries to obtain the grain they need.

In an effort to promote free markets, the European Union has been in the process of reducing farm subsidies and this has accelerated the process.

"It's much easier to do with the new economics," said Michael Mann a
spokesman for the EU agriculture commission. "We saw this coming to a certain extent, but we are surprised at how quickly it is happening."

But he noted that farm prices the last few decades have been lower
than at any time in history, so the change seems extremely dramatic.

Diouf noted that there had been "tension and political unrest related to food markets" in a number of poor countries this year, including Morocco, Senegal and Mauritania. "We need to play a catalytic role to quickly boost crop production in the most affected countries," he said.

Part of the current problem is an outgrowth of prosperity. More people in the world now eat meat, diverting grain from humans to livestock. A more complicated issue is the use of crops to make biofuels, which are often heavily subsidized. A major factor in rising corn prices globally is that many farmers in the United States are now selling their corn to make subsidized ethanol.

Mann said the European Union had intentionally set low targets for
biofuel use -- 10 per cent by 2020 -- to limit food price rises and
that it plans to import some biofuel. "We don't want all our farmers switching from food to biofuel," he said.