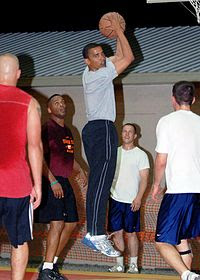 The surprise announcement by Mr Edwards, a former North Carolina senator who was his party's vice-presidential nominee four years ago, left former first lady Hillary Clinton facing Illinois Senator Barack Obama for the Democratic nomination in what seemed likely to be an long, bruising struggle.

Kossacks, who had supported Edwards by a country mile, have now rushed to support Barack Obama. Hillary is not liked by Kossacks (members of Daily Kos, a progressive political blog site) but they will grudgingly support her if she ends up being the Democratic candidate.
Posted by One Salient Oversight at 08:46

This is my biggest gripe with the Kossacks: their lack of discernment. John Edwards was a big phony and a demagogue. If the Kossacks couldn't see it, then the future holds nothing but continued disappointment for them.

I admire their zeal, but if they want to have a Chinaman's chance of their views prevailing, they need to grow up.

I have to disagree there Beamer. The Kossacks are essentially the future of the Democratic Party and have a great deal of influence over what will happen in the coming years. The fact that they did not choose the popular candidate does not necessarily mean they are out of step, but that they are distinct from the Democratic base.

Time will tell how much they influence US politics. They've shown that the are more value driven because they (along with other progressive blogs) have been quick to criticise legitimate problems with Democrats.

One reason they are not fans of Hillary is not because they have fallen into the "Hillary is evil" contingent of society, but because they saw during the Clinton presidency an erosion of party power in congress that was not helped by either Bill or Hillary.

I have to say, though, that this whole Primary business, whereby candidates from the same party compete against each other in public, is quite distasteful. I know no other country in the world which does it. Just another part of the broken system that is the US Political structure.

I agree wholeheartedly with your opinion on our current primary/caucus system - and it's gotten worse in the last couple cycles.

The Kossacks may be the future of the Democratic Party, but not unless they grow up and stop throwing tantrums when candidates don't adhere to their preferred platform 100%. And gloating over the misfortunes of people with whom they disagree politically is just awful.

I didn't choose the more popular candidate either (if you can characterize my extremely mild preference for Bill Richardson as a choice), so that is not my issue with them. John Edwards is a phony and a hypocrite and to choose him purely because he's not Hillary is childish. If they really thought he was something other than a hypocrite and a phony, then they are deluded and not worthy of being the future of any party but the Loony Party.

Christopher Hitchens recently defined pretty well my opposition to Hillary Clinton. I don't know if you consider telling the truth about a candidate's bad points the same as calling them "evil", but if so, then I can live with it.

So your basic argument is:

Is that about right?

I question whether they can or should be taken seriously, despite their "zeal", if they were unable to perceive Edwards' hypocrisy (or worse, chose to ignore it). They boast about being against hypocrisy and for values, yet they supported a guy who was the biggest hypocrite in the race with the least sincerely-held values.

Sunday am so Sat arvo in NYC - turned on Sky News and SPORT - moved onto Fox and their Saturday geek looking laughatme reporter was in Times Square talking to the person on the street - it is now fashionable to say you are a Obama supporter.
They are being steam rolled. The hug with Oprah was bigger than Ted K's although I was more impressed that Caroline spoke before him.

The Hillary is evil thing I keep hearing - stuff about she swears etc.

Now Cossacks like Cowboys in my English can be used as a negative or a positive so which usage does Kossacks refer to?