Slow demolition of US economy 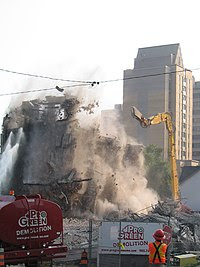 The U.S. economy braked sharply last autumn, pulling growth for all of 2007 to its lowest speed in five years as the housing slump took a heavy toll.

Aside from the housing slump, slowing consumer spending, inventory liquidation and lower overseas sales restrained the economy. The 0.6% pace wasn't only much slower than the third-quarter's racing 4.9%, it was far below expectations on Wall Street. The median estimate of economists surveyed by Dow Jones Newswires was 1.2% GDP growth during the autumn months.

The Federal Reserve lowered its benchmark interest rate by half a point to 3 percent, the second cut in nine days, and indicated its willingness to do so again to prevent a U.S. recession.

``Downside risks to growth remain,'' the Federal Open Market Committee said in a statement after meeting today in Washington. In a reference to the volatility of the past five months, the Fed added that ``financial markets remain under considerable stress and credit has tightened further for some businesses and households.''

The dollar tumbled and Treasury notes weakened after the decision as traders anticipated another reduction at the Fed's March meeting, if not before. The cumulative reduction in rates since Jan. 22 is the fastest easing of monetary policy since 1990.

The Fed's rate cutting is almost blind panic. The forex markets dumped the US dollar as soon as Bernanke made the announcement. At issue here is whether or not the contraction of the US economy will have a substantial deflationary effect. All economic contractions result in some form of deflation. Yet the long-term decline in the US dollar (which is now, yet again, within spitting distance of a record low) has an inflationary effect. When the two are combined - contractionary deflation added to inflationary devaluation - what will the net result be?

My bet is that the net result will not just be inflationary, but painfully inflationary. I use as my basis here the experiences of other nations throughout economic history who have suffered currency devaluations and were forced to go through painful recessions that were accompanied by high inflation. I don't believe that the US is somehow different to other nations in this regard.

What I am therefore predicting in 2008 is a period of painful stagflation for America - a combination of economic contraction and inflation which will only be solved when the Fed raises rates and plunges the economy into a double-dip recession.
Posted by One Salient Oversight at 08:35

Re: “The forex markets dumped the US dollar ...”