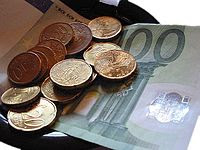 From the department of everybody seems to win:

Some 70,000 former insurgents are now being paid $10 a day by the U.S. military. It costs about a quarter billion dollars a year.

It's a controversial strategy, and Macgregor warns that it's creating a parallel military force in Iraq that is made up almost entirely of Sunni Muslims.

"We need to understand that buying off your enemy is a good short-term solution to gain a respite from violence," he says, "but it's not a long-term solution to creating a legitimate political order inside a country that, quite frankly, is recovering from the worst sort of civil war."

Pay the enemy money to not fight. I have to admit, that is actually a very good strategy.

It's a pity they didn't simply pay Saddam a billion dollars to live in a pacific paradise for the rest of his life and hand Iraq over to US control. It would have been cheaper and it would have resulted in less deaths.

Of course, the idea might spread so that dictators in other countries around the world clamour to get paid off in permanent exile while their beleaguered homeland goes through social and economic reforms to improve their standard of living. Of course we wouldn't want that to happen now would we?
Posted by One Salient Oversight at 13:26

Bob Woodward in "state of Denial" suggests that the Saudis would have paid off Saddam if Bush had let them.

Plus Jay Garner was going to recruit Saddam's Army at $20 at head except that Paul/Jerry Bremer took over and sacked the army saying they had disbanded/disappeared anyway. Woodward says Garner had a deal well in hand. So all those guys went somewhere with their weapons. I wonder where!