Kevin Rudd wants us to save more 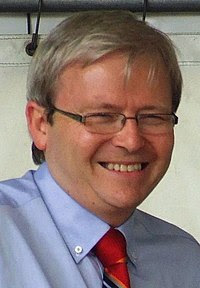 From the department of ho-hum:

Householders could be offered incentives to cut spending and save more of their income as part of the Federal Government's drive to control inflation.

Mapping out a five-point plan to fight inflation yesterday, Kevin Rudd said he wanted to build a national savings culture to help reduce demand pressures which were pushing up prices.

"Providing attractive incentives to save can help take the pressure off inflation, help people save for their future and help lift national savings," the Prime Minister said.

While he did not give details, measures likely to be examined include encouraging higher superannuation contributions and tax breaks for savings.

Mr Rudd also promised to increase the budget surplus to around $18 billion next financial year and to speed up policies to train more skilled workers and get more people into the workforce.

Kev's been in power for a short amount of time. It's too early to judge him for his performances but, I have to say, I'm not impressed as yet.

Rudd wants Australian households to save more money. That's an admirable goal. It's an important goal as well since a) Saving instead of spending will reduce inflation, and b) Australia's household savings rate is not as strong as it should be. As the figures show, Australian Households have been on a borrowing and spending binge for a number of years, and have only in the last 12-18 months begun to reverse that trend. Servicing debt now accounts for about 12% of gross disposable income.

Rudd's solutions, though, are not going to work terribly well. In order for Australian households to increase their savings rate, they need to value money more. In other words, the value of money has to increase in relation to all the goods and services it can buy. This means that inflation has to not just be fought against, it has to be defeated.

A person with money has a choice - they can either spend their money or save it. How each individual makes this choice differs from person to person as some will save more than others while another will spend more than others. This is how markets work, in all their flawed glory. Yet this behaviour will only continue so long as things remain equal - change the equations and the market will change its behaviour.

If the Reserve Bank increased interest rates, it would make money more valuable. That change in the equation will lead a significant amount of net spenders to become net savers. The reason is simple - these people will choose to save their money to increase their personal wealth rather than spend the money on goods and services.

As I have argued many times before, any form of price instability is going to hurt the economy over the long term. Keeping inflation between 2-3% may seem to be the Reserve Bank's prerogative, but any form of inflation will result in cumulative levels of overspending and over-borrowing. If the Reserve Bank increased rates and aimed at keeping the price of money absolutely stable, the result will be a) a slowing economy initially, b) a decrease in the current account deficit, c) increased personal saving rates and d) a more sustainable economy over the long term.

Of course, Rudd and the Reserve Bank do not consider Absolute Price Stability to be a worthwhile policy, mainly because they are probably completely unaware of it (and probably because I am the only person in the world who seems to champion it). Nevertheless, it is to Rudd's detriment that he does not link high household savings with higher interest rates.

Posted by One Salient Oversight at 13:29