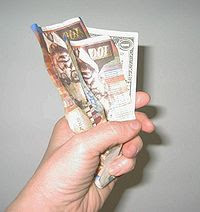 I don't know much about Jeremy Clarkson except that he is involved in Top Gear, a TV program that is quite popular and which I do not watch.

In a newspaper column recently, Clarkson wrote about the recent furore over 25 million people's personal data being lost. He said that the furore was about nothing since, his logic went, that when people get access to your bank account details they can't do much with it anyway. And to prove his argument, he even published his own bank account details in his column.

Well, Jeremy just got Pwned, big time. Some time after he published his column someone removed 500 pounds from Clarkson's bank account and deposited it in a British charity. Clarkson has since admitted that he was wrong.

Details here.
Posted by Neil Cameron (One Salient Oversight) at 09:03

How Amazing - why on earth would he think no risk? But the strange part is that the bank cannot reveal who took the money due to the Data Protection Act. Are they just saying as he published the password that is their out. Or was the whole thing a set up to demonstrate the problem....

BTW Top Gear is not about clothes which I first thought of when I saw it in TV guide - but a somethimes interesting show on cars....