What if Bristol were black? 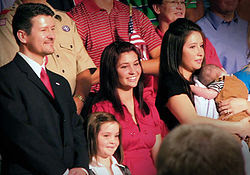 From the department of It's okay if you're a Republican?

What do you think conservatives would have to say about her? "Typical, urban youth with no sense of responsibility raised with loose morals who plans to depend on the state to take care of her child." You know it. It's not within dispute. That's exactly what they would say.

Barack Obama has told everyone to lay off this because it is a personal, family matter. Yes, but it also has public policy ramifications. Governor Palin is for abstinence only education. Well, that obviously didn't work.

Has she learned her lesson? Will she now amend her policy position on this matter given her personal record of failure in implementing this ridiculous stance?

Notice I am not blaming Bristol. Quite the opposite. People like me are the ones that defend the Bristols of the world. It is conservatives like James Dobson, Rush Limbaugh and yes, Governor Palin who usually attack people who find themselves in Bristol's situation. They demand a dogmatic adherence to moral strictures and chastise and belittle women who have children out of wedlock. Especially if they are women of color.

Which brings us back to Obama. Do you think the Republicans would lay off of Obama if his 17 year-old daughter had gotten pregnant out of wedlock? You know the answer to that question. Everyone does.

"This is what the permissive liberal attitude gets you. If you allow your children to think everything is acceptable, they have no boundaries. They wind up getting themselves in trouble like this. It's a predictable result of the liberal lifestyle."

And that's before the subtle and not so subtle racial implications are brought into this. There is a constant double-standard of how black and white people and politicians are covered in this country. When a young black girl gets pregnant, she's looking to get money from welfare. When a young white woman gets pregnant, she made an unfortunate mistake and her family is being supportive in trying to help the make the best of it.

When presented with these examples, no matter who you are, you know in your heart that this double standard exists. All of this is not said to condemn Bristol Palin or Cindy McCain. This is to get you to think twice about your own assumptions about the next time you hear a story of a young African-American woman who got pregnant in the inner city or a minority who got addicted to drugs and committed a crime to feed that addiction.

There but for the grace of God go Bristol Palin and Cindy McCain.

On the pinhead front, 16-year-old Jamie Lynn Spears is pregnant. The sister of Britney says she is shocked. I bet.

Now most teens are pinheads in some ways. But here the blame falls primarily on the parents of the girl, who obviously have little control over her or even over Britney Spears. Look at the way she behaves.

Jim Daly, president and CEO of Focus on the family, said in January this year:

...the number of working mothers who think a full-time job is the ideal arrangement for them has dropped more than 10 percent in the last decade — a reflection, one must assume, of a renewed realization that nothing is more important than being there for your kids.

James Dobson, in "The New Dare To Discipline", blames the supposed crumbling of “moral values” and “anarchy that is now rumbling through the midsection of democracy” on working mothers and “permissiveness.”
Posted by One Salient Oversight at 09:39

Wow. That was a passionate post! You are right about a double standard... but the double standard swings both ways! I don't say that to condone those types of attacks. I just is what it is. Politics are dirty.

As far as I am concerned, and I do consider myself conservative, I would feel the same regardless of the color of the pregnant teen. One of our daughter's best friends just turned 18. She is black and she has a two year old severely disabled child.

I do see the point you are making but realize that not all people within the different parties agree with everything their party stands for.

Mrs. Beamer agrees with Coffee bean. Coffee bean (and Mrs. Beamer) have just disproved the drooler at Huffington Post you linked to. He said, "What do you think conservatives would have to say about her? 'Typical, urban youth with no sense of responsibility raised with loose morals who plans to depend on the state to take care of her child.' You know it. It's not within dispute. That's exactly what they would say."

Yet, Coffee bean and my wife both demonstrate it is within dispute. Cenk Uygur is plainly, clearly and demonstrably full of crap.

If knuckleheads like Uygur actually took the time to know some conservatives, he'd find they are not all the racists he says they are. But he could never admit it, because then he would likely be banned from HuffPo, Daily Kos and - worst of all - all the best parties in Manhattan.

I've read this kind of dreck by conservatives, too, and it is just as infuriating, but today is Cenk Uygur's day. Cenk Uygur is a toad.

My apologies to toads.

"In the 32-year history of Focus on the Family, we have offered prayer, counseling and resource assistance to tens of thousands of parents and children in the same situation the Palins are now facing. We have always encouraged the parents to love and support their children and always advised the girls to see their pregnancies through, even though there will of course be challenges along the way. That is what the Palins are doing, and they should be commended once again for not just talking about their pro-life and pro-family values, but living them out even in the midst of trying circumstances.

"The media are already trying to spin this as evidence Gov. Palin is a 'hypocrite,' but all it really means is that she and her family are human. They are in my prayers and those of millions of Americans."

and on another page
“Sen. McCain’s selection of Alaska Gov. Sarah Palin is an outstanding choice that should be extremely reassuring to the conservative base of his party. She is a strong executive who hates corruption and puts principle above politics. After floating the names of Tom Ridge and Sen. Joe Lieberman in recent weeks – selections that would have created consternation among pro-family Republicans – Sen. McCain has chosen a solid conservative who has a reputation for espousing common sense.

“Gov. Palin’s commitment to the sanctity of life is not just a political position. She was advised to abort her fifth and youngest child when it was learned he had Down syndrome. She refused. That’s bravery and integrity in action.

“Gov. Palin’s views align with Sen. McCain’s own stated position that human life is precious and must be protected – and that gives us confidence he will keep his pledges to voters regarding the kinds of justices he would nominate to the Supreme Court and the way he would conduct our nation’s domestic and international affairs. This selection by Sen. McCain is a very encouraging sign for his campaign.”

Quite the hot topic you've got going here!

We are in the same city as Focus on the Family and I actually taught two classes on their campus last year. We were pretty upset when Dobson said he wouldn't vote if McCain got the nomination. I am glad to see he's come around and is being supportive now.