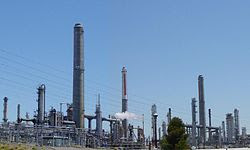 Last quarter's US GDP figures are coming under renewed scrutiny. Like many in the econ-blog community, I downloaded the official release from the BEA (pdf, 628.2kb) and discovered that 2008 Q2 GDP was revised upwards from 1.9% to 3.3%. Oh well, thinks I, another short term prediction failure to add to my growing collection of eggs attached to my face.

But it turns out that I'm not the only one. Wary as I am of subjectivity, some econ-bloggers are saying "It doesn't feel like 3.3% growth". The result has been a critical analysis of the role of the GDP deflator - the arguments being that a rising oil price has actually ended up inflating GDP figures rather than deflating it.

Now this is in the area of complex wonkiness and if you personally find it hard to follow my own economic arguments then I suggest you don't click on this link.

In simple terms, some economists are questioning the way in which GDP figures are created. This is a good thing, but for an self-taught economist like myself I begin to lose the thread on occasion. But if I'm wary of people relying upon subjective experience to determine what is true, I am even more wary of people who begin to question the way in which data is gathered - especially if they have no real idea of how the data was gathered in the first place.

This time, however, the questioning of GDP figures has not come from the tinfoil brigade, but from qualified economists willing to speak their mind. Barry Ritholtz, the econ blogger at "The Big Picture" has, with the help of others, examined every instance since 1959 of an economy that grew between 3.0 and 3.5%. The result was astonishing, since the median figures showed low unemployment, high business and consumer confidence, high industrial production, low consumer price inflation, low producer price inflation - in short, everything that is NOT present in 2008 Q2. Clearly something is wrong and I wouldn't be surprised if the next GDP release sees a revision downwards.

One of the more disturbing features of 2008 Q2 was that employment figures fell significantly while GDP supposedly rose significantly. Unemployment in April was 5.0% but then 5.5% in May and 5.5% in June (source). This sharp increase in jobless figures was punctuated even more by July's 5.7% figure. The figure for August is due tonight.

On the more wonky side of things has been an interesting article by Jeremy J. Nalewaik, an economist who works for the Federal Reserve. In that article (written in 2006) he argues very persuasively that Gross Domestic Income (GDI) adjusted by the GDP deflator is a better way of working out the beginnings of recessions that anything based upon GDP data. Indeed, Brian Blackstone at the WSJ used this methodology a few days ago and reported that 2008 Q2 GDI figures were a growth of 1.9%. Moreover, the previous two quarters, 2008 Q1 and 2007 Q4, showed a decline. Thus, according to the Nalewaik model, not only did the US enter a recession in the December quarter of 2007, but also did not experience as much growth as GDP figures indicated in 2008 Q2.

And that makes more sense. It feels like a recession doesn't it?
Posted by One Salient Oversight at 11:51