Fannie, Freddie and an alternative form of socialism 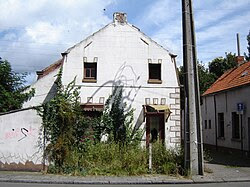 Being politically left of centre, I am obviously for some level of government involvement in the marketplace that can either replace or augment any form of market behaviour that harms society and/or the market itself.

Having said that, let me just ask some really basic questions about the whole Fannie/Freddie mess.

The first question is - why did the US even create these monsters? Yes, yes, their basis was in The New Deal, which, to all pro-market Americans means it was doomed to fail. But, even from a Social Democratic point of view, the creation of a government sponsored enterprise (GSE) that dominates an economy's mortgage sector by guaranteeing loans is rather weird. I might be wrong here, but as far as I know, no Western nation with a more leftist economy that the US (ie all of them) has similar institutions.

Here in Australia, where government spending represents between 30-35% of the economy, there is no direct equivalent to Fannie and Freddie for our mortgage market. There are loan guarantors, and there are some GSEs, but not a combination of both and certainly not any with such a massive influence upon a major marketplace. In this, the US is actually unique - that within the world's most market-friendly economy there lies not one but two massive government sponsored enterprises whose role is to somehow protect the mortgage market from itself. This has not occurred in nations who run social democracies, so why should it be running in the US?

The second question I have concerns the bailout. The result of the subprime meltdown has been a collapse of the housing market and a wider "credit crunch". Banks are beginning to go under, and both Freddie and Fannie's share prices have collapsed to the point where their market capitalisation is less than their liabilities. For all intents and purposes, both Freddie and Fannie have gone bankrupt. In comes the US government and bails them out. Whatever you may want to call it, this was essentially a nationalisation of the two mortgage giants. They are no longer GSEs, they are now government departments.

Of course such a bailout means that the government has taken upon themselves massive amounts of debt, along with having to buy the shareholders out. I don't know exactly how much money this is going to cost the federal government, but it is a substantial amount and will significantly add to the amount of net public debt already in place. But I can't help thinking that there could have been a better solution. Instead of spending all this money to keep shareholders happy, why not divide the money by the amount of money all people owe on their mortgages and then grant them a once off government funded mortgage subsidy, an amount which will be proportional to the amount they owe in their mortgage?

In simple terms, this would mean that all borrowers would receive a voucher from the Federal Government that they would then mail off to their lenders - the effect being a reduction in their total mortgages. That influx of money would not only prevent a whole swathe of ordinary Americans from foreclosure, but, as the money circulates, would also help prevent some banks from closure, prevent some mortgage companies from going bankrupt and, of course, help Fannie and Freddie's bottom line. Rather than throwing money at the shareholders, the Federal government could have helped ordinary homeowners and the entire market that depends upon them.

While the Fannie and Freddie bailout was inevitable, it seems rather illogical to focus upon just shareholders when they could have helped everybody in the entire industry, including the Fannie and Freddie shareholders, by throwing money at the borrowers. You see, the best form of "socialism" is one where benefits are universal, where welfare and pensions are spread broadly rather than being a narrow focus on a particular industry or market. The nationalisation of Fannie and Freddie is not a broad benefit, but a narrow one, and one that entirely benefits investors (ie, not poor people).

To be honest, I'm all for Fannie and Fred's closure. Whatever good they were able to achieve in the mortgage market can be replaced by private enterprises, better rules and regulations and the enforcement of such regulations. The death of Fannie and Freddie will not ruin the mortgage market, but will make it leaner and, hopefully, less subject to overspeculation and investment bubbles. The intention behind the creation of Fannie and Freddie is not to be questioned, but the results must be.
Posted by One Salient Oversight at 11:01