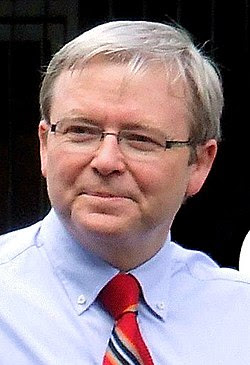 For my Australian readers, it comes as no surprise that Kevin Rudd's short time as PM has not been one to gush about. Even back in 1996 I was cynical enough to know that John Howard's shine would eventually wear off but in 1997 he was still, in my mind, quite liked by most, including myself. And that wasn't due to clever marketing but substantial policies that had been initiated but had yet to bear any fruit.

Rudd, on the other hand, is suffering from a bit of malaise. I use that word deliberately because he reminds me slightly of Jimmy Carter's late 1970s problem. Rudd is unlucky enough to become PM during the cusp of a world recession while Howard was "lucky" enough to be PM during a period of great expansion.

One thing which invigorated the early Howard years was the conservative rhetoric that went along with it. Despite much of it being mere blabber, there was enough substantive statements to make it "feel" as though Australia was headed by politicians who had clear goals in mind. It doesn't feel this way presently. I know that centrist ideas are typically difficult to energise people because they are so, well, "complex"... but there's no real debate that I can see going on about Australia's future on behalf of the ALP. Maybe I'm out of touch... I know more about US politics than Australian politics these days.

What I do know is that the ALP is in power in every state government in Australia and controls the Federal government. Despite being "new" to power in Canberra, there is a jadedness about the ALP that I feel at the moment. The Coalition may have been a toxic mixture of racists and populists but at least they had some brilliant policies that bore fruit. The ALP seems filled with political operatives who are more concerned about their own position within the party than with good governance. The Coalition always seemed to produce political "Mavericks" who, for good or ill, roiled the party and the nation with ideas. The ALP, on the other hand, just seems bereft of ideas.

As Australians all know, "Claytons" is a brand of non-alcoholic beverage that looks like Whiskey but tastes like anything but. Back in the 1970s Claytons created a brilliant marketing campaign that has entered the national psyche. This campaign had the message "Claytons - the drink you have when you're not having a drink". Ever since then the term "Claytons" has been used as a perjorative term. In this case, the ALP government is indulging in "Claytons change" - the change you have when you don't have change. It means a cheap rip-off, a pale, weak and despised copy of what should really be there.

Ross Gittins, a noted economic commentator at the Sydney Morning Herald, says this:

Kevin Rudd fought the election by promising "fresh leadership" that would make our lives better without involving unpopular change. Indeed, he promised to retain vast swathes of John Howard's policies. In short, he promised change without change.

The public's slowly growing disillusionment with the Rudd Government represents its dawning realisation that change without change isn't possible.

Rudd left us with the impression there was something he could do about high petrol and grocery prices. As it turns out, what he's able to do is of little consequence. Somehow that's a lot clearer now than it was then.

Rudd promised us an Education Revolution that would bring us better schools, universities and technical colleges and so more of the highly skilled, better-paid jobs we need to prosper in a more competitive world.

But not to worry, this would not involve interfering with the Howard government's scheme for making grants to public and private schools.

I respect Gittins as a commentator. Apart from "saying it like it is", he is more concerned with good policy than with political ideology. He was one of the first respectable expert commentators to question John Howard's economic policies back in the late 1990s. Although I often disagree with Gittins' economics these days, I think his article is spot on and fleshes out everything I am feeling towards Rudd and the ALP these days.

If Rudd and the ALP continue in their do-nothing, "Claytons change" ways... and if the Coalition flips on climate change and the environment... I would be more than willing to endorse the Coalition at the next election.

Posted by One Salient Oversight at 12:42

And What ever is happening with NSW - looks like we are about to have a completely new cabinet (inexperience?)

2. I watched last week's Cutting Edge on Tony Blair tonight, in which Blair himself and others commented that at the the start of their time in government, they suffered from what was (or, Blair says, perceived to be) "initiative-ism", which sounded very familiar with regards to what the Rudd govt has been up to.

Blair said this was a habit they brought over from Opposition, where you're 'obliged' to keep coming up with new initiatives (though obviously not having to do anything about them).

Then they get into government and I guess they keep doing what they know, and you get silly pronouncements like the Asian E.U., or pledges of world wide nuclear disarmament (!) - every news cycle needing a new initiative, and not much long term thought or planning being done.

Hopefully they'll get it out of their system and knuckle down a bit, but all in all I'm not particularly fussed with their performance as a voter. A boring, normal Federal govt is fine by me compared to the xenophobic ideologues running the show before.