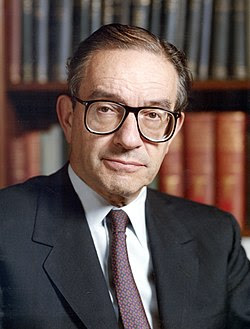 Finally some are seeing sense. Brad DeLong, UC Berkley economist and former Clinton advisor, has publicly announced that he has given up his faith in "Greenspanism":

For a decade now, I have been a follower of Greenspanism --the doctrine that I name after former Fed Chair Alan Greenspan that the constraint on expansionary monetary policy is inflation and inflation alone. The idea is that the first priority of the central bank is to maintain low consumer price inflation, and that the second priority is--given low current and forecast consumer price inflation--to maintain maximum employment and purchasing power--and the third priority of the central bank is that there is no other third priority.

Opposing Greenspanism is what I call Mussaism[2]. Mussaism--the doctrine I name after former IMF Chief Economist Michael Mussa--holds that there are two constraints on central bank activity. The central bank must insure:

Only after it has successfully achieved these two higher priorities can it then even begin to worry about:

The Greenspanist retort to the Mussaites--a retort I would have said I believed 100% a year and a half ago, 90% a year ago, and 60% last March--is that creating unemployment and idle factories because you are scared of what might happen when irrational exuberance dies away and asset prices collapse is a crime; that modern central banks are powerful; that they can successfully manage whatever crisis is provoked when it happens; and that it is easier to sweep after the elephants have gone through than to try to stop them--especially when stopping them requires the destruction of millions of jobs.

I don't see how I can maintain my belief in Greenspanism today[3].

Therefore I abjure, I recant, and I do penance. I transfer my allegiance and fealty to Michael Mussa, who is my new guru.

To which I replied in the comments:

I would argue that inflation was NOT a priority of Greenspan's - the inflation rate was way too high even though it was "low" by historical standards. Moreover, even with "low" inflation between 2003 and 2005, real interest rates were negative and were the main cause of the investment bubble.

So I would amend the central bank's mission as follows:

1) Maintain absolute price stability (an average of zero inflation over the course of the business cycle).

The above together will prevent asset price bubbles and help maintain economic growth and employment.

One of the problems of the later Greenspan era were two major asset price bubbles - the tech boom and the subprime boom. Both bubbles popped and caused a recession (the latter being the more serious one, although it could probably be argued that the two are linked). Moreover, both bubbles were blown up during a period of "low" inflation.

"Inflation targeting" is one major mission of central banks. The Fed, unlike the European Central Bank and other international central banks, does not have a hard and fast rule like the ECB (eg inflation kept below 2%). Absolute Price Stability is simply inflation targeting that ensures "zeroflation" over the course of the business cycle. This is not deflation (since deflation is not price stability either) and nor is it a knee-jerk reaction to cyclical price rises (eg food and oil). The idea is that interest rates are adjusted to ensure that a cycle of slight inflation and slight deflation balance one another out.

And, as I commented at DeLong's site, the creation of asset price bubbles will be prevented by such strict monetary policy.
Posted by One Salient Oversight at 08:14