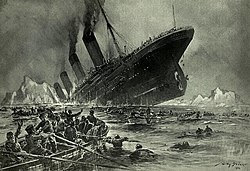 “My goodness. I’ve been in the business 35 years, and these are the most extraordinary events I’ve ever seen,” said Peter G. Peterson, co-founder of the private equity firm the Blackstone Group, who was head of Lehman in the 1970s and a secretary of commerce in the Nixon administration.

And from the WAPO:

The failure of the nation's fourth-largest investment firm offers a profound test of the global financial system, and government and private officials had been bracing Sunday night for an upheaval in a range of financial markets that have never before experienced the bankruptcy of such a large player. To keep cash flowing normally through these markets, the Federal Reserve announced new lending procedures, while 10 major banks combined to create a new $70 billion fund.

And this from the Sydney Morning Herald:

"Merrill Lynch is off the map and so is Lehman in the space of a weekend," said a banking analyst at a major investment house, who spoke on the conditions of anonymity. "It's unprecedented for the last 100 years."

"At this moment, it's hard to know the exact implications," he said.

He said one area Lehman's failure could hit local firms would be in the "massive" over-the-counter derivatives trading which affects foreign exchange, interest rates and equities markets in Australia.

The Australian Securities Exchange moved immediately to suspend Lehman from pariticpating in trade this afternoon, after the US bank signalled its intention to file for Chapter 11 bankruptcy in New York.

Investors struggled for parallels to the meltdown affecting shares, outlooks and asset values, more than a year after the subprime lending crisis emerged in the US.

"If you go back to other crashes, like in 1987, it was done all in one hit," said Rick Klusman, head of institutional trading at Aequs Securities. "Now the losses are so big they're trying to ride them through two and three quarters."

"It's the worst situation for the US banking system since The Great Depression."

The 158-year-old firm, which survived railroad bankruptcies of the 1800s, the Great Depression in the 1930s and the collapse of Long-Term Capital Management a decade ago, has filed a Chapter 11 petition with U.S. Bankruptcy Court in Manhattan today. The collapse of Lehman, which listed more than $613 billion of debt, surpasses WorldCom Inc.'s insolvency in 2002 and Drexel Burnham Lambert's failure in 1990.

Will the U.S. financial system collapse today, or maybe over the next few days? I don’t think so — but I’m nowhere near certain. You see, Lehman Brothers, a major investment bank, is apparently about to go under. And nobody knows what will happen next.

All of the independent broker dealers are going to disappear. In March it was Bear Stearns. Tonight it was Lehman and Merrill Lynch. Morgan Stanley and Goldman Sachs should go find a buyer tomorrow. The business model of broker dealers is fundamentally flawed. They cannot survive.

And then there's this, from Donald Luskin, one of John McCain's economic "advisors":

...we're on the brink not of recession, but of accelerating prosperity.

Posted by One Salient Oversight at 19:52

We live in interesting times. I never thought I would live to see the day that Paul Krugman admitted that he did not know what was going to happen!