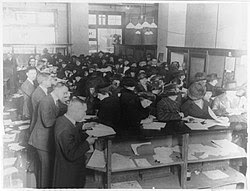 I'm personally not interested in the finer points of the Paulson bailout plan. Whether it is an undemocratic grab for power or some sort of corporate welfare is really not the issue for me. I reluctantly agree that some sort of bailout is necessary, but I am no real supporter of Paulson and Bernanke, nor the financial system that got itself into this mess in the first place. Without some sort of relief, the US credit system would seize up and, although this is somewhat deserved, the collatoral damage for the rest of the economy would be too high.

So, the bailout is necessary. But I'm not going to stop there. With such a massive amount of debt added to the public accounts, the Federal government will be paying back this debt for years to come. Short term relief? Yes. But long term pain as the government struggles to repay the debt.

WIthout some way of paying for the debt, the only option seems to be tax increases. The bailout plan is just too large, and US government spending is just too (relatively) small for any form of expenditure cutting on behalf of the government - unless, of course, Americans are happy to suddenly give up Social Security or shut down the military.

And the ones who should shoulder these tax increases? Why not the ones who got the US into this mess in the first place? There seems no choice but to increase income taxes on the highest marginal tax rate. The corporate tax rate should also be increased.

Naturally, such proposals would leave some spluttering into their gin and tonics. "Raise taxes?" they say, "What a preposterous thing to suggest! Don't you know that lower tax rates encourage economic growth? If we raise taxes during a recession, we'll be killing the goose that lays the golden egg!".

Others would not just be spluttering into the gin and tonics but also be locking and loading their assault rifles. "The Federal guvmint is just TOO big!", they say "Taxation and government are violence! If the guvmint raises taxes, I'll be shacking up in Idaho!"

To which I reply good riddance. Go to Idaho to protect yourself from the guvmint while the rest of the country suffers under the hand of corporate irresponsibility.

Yes, this is another fine mess you've got us into corporate America and the political shills you have bought and paid for who pass legislation to make you richer.

But back to Paulson and Bernanke. Yeah, congress, give them the money. But raise taxes too. In fact, insist that no bailout plan be passed without Paulson, Bernanke and Bush adding tax increases to the bill.
Posted by One Salient Oversight at 09:06

I glad some of us see this clearly.

I glad some of us see this clearly.