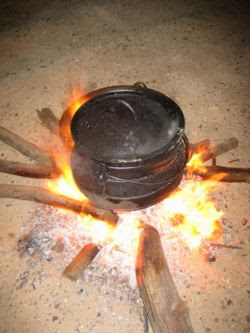 You can almost hear the sound of billions of people on planet Earth going "WHEW!". Despite shortcomings in The Big BailoutTM, there was no real doubt that the bailout itself was needed. And if there are some major problems with its details, Congress can just create an eventual alternative.

The news was greeted by a 1.5% increase in the value of the US Dollar as investors all around the world celebrated the weekend meeting's outcome.

But what happens now?

There is every chance that this coming week will see a continuation of the market turmoil we've been having for the past few weeks. Wachovia is teetering on the edge, and the failures of financial firms and banks in the last fortnight - some with decades of service in the economy - will still rattle people.

Then again, there is also every chance that this week won't see much happen at all. There's not even any assurance that Wall Street stock indexes will rise today - here in Australia they dropped 2% despite the success of The Big BailoutTM

As a self-proclaimed futurist and econ-prophet, I can say, yet again, that I am absolutely no good when it comes to actual dates. My record in predicting in the short-term is patchy. Yet when it comes to the long term, I am more than happy to point at my record.

Put simply, The Big BailoutTM is not going to turn the economy around. There is still a long way for the economy to fall. Unemployment will, I believe, exceed the November and December 1982 figures of 10.8% sometime within the next 12-18 months. Moreover, I believe that GDP will decline in 2008 Q3 (now), 2008 Q4 and 2009 Q1 at least.

But one of the most important issues that I have spoken of in recent times is the potential for capital flight - when investors sell off US investments and purchase other currencies (such as the Yen and the Euro). Despite the bailout I still think this is a danger. Why?

While this form of financial propitiation has the purpose of limiting the net damage, it remains to be seen whether the transference will end up crucifying both taxpayers and Wall Street. Any crash in the value of the dollar would drive the economy quickly into an economic apocalypse that will have many yearning for a messiah to come and save them.

And yes, if you know anything about Christian Theology, I agree that the last two paragraphs might come off as cheesy.

But all this comes back to the points I have made recently about The Washington Consensus. If the US Dollar is to remain healthy (and by that I mean not falling through the floor) then harsh policy measures need to be put into place - and the sooner the better.

Back in February I argued that Austerity is the cure to America's ills. Just as an obese, unhealthy person should cut down on their food and exercise more if they are to return themselves to health, so too must the US go through a period of lower consumption and harder work. America's days of being the world's biggest consumer and borrower are over - in its place must come a period of realignment where the US begins to save and produce.
Posted by One Salient Oversight at 21:05

So the economists who cheerleaded the rush to outsourcing producing jobs to low wage countries will now tell us we're lazy because we don't produce anything. The flaw is, of course, with the Americans, not with the economists. Nice Double Bind there.

Any crash in the value of the dollar would drive the economy quickly into an economic apocalypse that will have many yearning for a messiah to come and save them.

Fortunately for you, me, and the world (both here and hereafter), the Messiah is running for president of the US and will likely be elected.

And then overnight, not only will the lion lie down with the lamb, but all our problems will just seem like a distant memory.

I for one am glad because I'm getting sick and tired of mowing my lawn.