Negotiations over a broad deficit reduction plan collapsed in acrimony on Friday after House Speaker John A. Boehner suddenly broke off talks with President Barack Obama, raising the risk of an economy-shaking default.

The epic clash between the White House and Congressional Republicans came a week before the government hits its borrowing ceiling, and set off sharp accusations from both sides about unwillingness to compromise.

“I want them here at 11 a.m. tomorrow,” Mr. Obama said. “They are going to have to explain to me how it is that we are going to avoid default.”

Anyone who has played Sim City 2000 will remember the importance of maintaining a tight budget. But if your city in the game gets to a point where you're running out of money you have a number of serious choices to make in order to balance the budget. One option you have is to cut funding to roads. When you do so, this guy (your roads and transport secretary) pops up and yells at you:

What happens then? As time goes by your roads begin to crack up and become unusable. This is turn reduces economic activity and your own tax revenue even further. It's a short term solution but ends up costing you far more in the longer term. It's a sure fire way to lose to game.

Then, of course, there is that Simpsons episode where Homer becomes the town's sanitation commissioner. He manages to gain this position through an election campaign where he simultaneously lies about the incumbent (and even defames him) and gives outrageous promises to the voters, all with Bono's consent. When the scheme blows up in his face (the yearly sanitation budget is used up in a matter of weeks) he resorts to a scheme whereby funds are generated by taking the trash from various US cities and storing it underneath Springfield. This, of course, turns the town into a smelly, garbage infested hell hole. An emergency meeting is held in the town hall and the people unanimously vote for the previous commissioner (Ray Patterson, voiced by Steve Martin) to retake the job. Patterson saunters on stage to music and then says this: 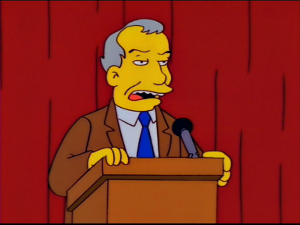 Oh gosh. You know, I'm not much on speeches, but it's so gratifying to... leave you wallowing in the mess you've made. You're screwed, thank you, bye.

I have to say that part of me wants to call the Republicans' bluff and not raise the debt ceiling. To be honest with you it would be the easiest and quickest way for them to achieve their ideological ends. I have already pointed out that such an action would cut federal government spending by around 40% and represent a cut in spending from about 25% of GDP to around 15% of GDP. According to historical notes on the US budget, the last time the US government was that small was 1951 - in other words the Republicans have a once-in-a-lifetime chance to shrink the government to its lowest level in 60 years. Moreover, this would not lead to debt default, as the 14th Amendment protects bondholders.

And it's not as though such a move wouldn't be popular, at least initially. There are many in the US who claim that the Federal Government has no real input into the economy. "Let's shut her down!" some would say, confident that such a move would have no real impact upon the economy and society in general. And as for all those pesky civil servants out of a job, well they weren't doing anything really important anyway. And it's not as though we can't afford to pay them unemployment benefits since such benefits would disappear anyway for everyone once the great spending cut occurs. And with so many people unemployed and not receiving benefits, they would then be able to get off their collective lazy asses and find jobs. Then the economy would start booming again.

Of course these sentiments are nonsense. Anyone with any understanding of the complexity of economics, the effect of government programs and the problems besetting the unemployed would know that such a gigantic cut in government spending would have only a negative impact upon the US. It would cause social and economic pandemonium.

And yet part of me wants to the GOP to do it. I do admit that there is some perverse pleasure in watching an economic collapse unfolding, in the same way that people hang around and watch the aftereffects of an accident.

Nevertheless I do have a rather pragmatic reason for wanting this to occur - the disaster that it brings on the nation (and the rest of the world) will be so damaging that no one would take hard-line conservatism seriously ever again. The disaster would be so horrible that Obama would be re-elected by a landslide and the Republicans would be utterly humiliated in Congressional elections. More than that, hard-line conservatism throughout the world would be discredited in the same way as communism was discredited after the collapse of communism.

And why? Conservatives have painted themselves into a corner. They are just so angry that things like Medicare, NASA, unemployment benefits and the Department of Education exist. It's not just that they don't like big government, it's that they so strongly believe that their understanding of limited government was the same thing believed by the founding fathers that anything, anything which suggests slightly higher government tax revenue or spending is immediately cause for revolution and "watering the tree of liberty". In the words of Grover Norquist, "I don't want to abolish government. I simply want to reduce it to the size where I can drag it into the bathroom and drown it in the bathtub."

Of course I see such people as not just hard-line but extremist. Their ideology has regressed so far that even Ronald Reagan, patron saint of Conservatives, would be labeled a "Republican in Name Only" for many of his policies.

And so this is why part of me wants the Republicans to follow through with the extremist ideology that now controls their party - it would allow them the chance to finally do what they've always wanted to do while simultaneously proving to the rest of America and the world the utter stupidity and unworkability of their policies. Their fate would be to disappear from the political landscape for a long, long time. The world would then become a much better place.

And as their doom descends and the party faithful shrink in horror at what they've done and seek to make amends, the voice of Ray Patterson calls out to them:

It's so gratifying to leave you wallowing in the mess you've made. You're screwed, thank you, bye.

Posted by One Salient Oversight at 12:45

Ditto. Unfortunately, Republicans are a lot tougher than Democrats. In the end, the Dems will wimp out because that's what Dems do.

The assumption that GOP voters would abandon them in droves, rather than blame Obama, is not borne out by reality (see the Bush Deficit being transformed into "Obama's deficit" or the 2010 midterms). People vote along party lines far beyond the limits of rationality - if anything, a crisis will intensify that tendency ... & people in crisis tend to prefer authoritarian political leadership due to fear & a need for a sense of safety/stability.

Also hard to see how there can possibly be a "landslide" for Democrats in 2012, when at least 2/3 of the seats in play are Democrat-held & thus the GOP's to win (in a presidential re-election year normally characterized by anti-incumbent sentiment).