Bigger government is needed for the US economy - OSO's New Deal

This graph from Calculated Risk has been worrying me for a while: 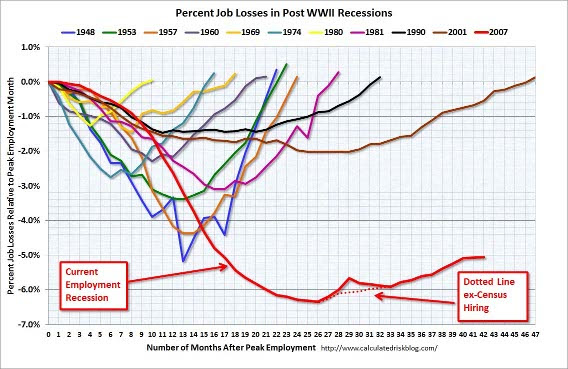 I'm still trying to work out what that is. I have at theory but that will come in another posting.

What is obvious though is that the market is just not creating enough jobs. While the cause might be debatable, the result is not.

But what is needed to fix this is not just another round of stimulus packages. What is needed is a structural expansion of government spending. In essence, the US government needs to spend more.

Of course readers of this blog might wonder if I have changed my mind from recent times when I advocated austerity. The problem is that the word "austerity" has ended up becoming synonymous with spending cuts - which is the favoured position of conservatives. While I have advocated spending cuts in the area of military spending I came to the conclusion that the only way the US could ever hope to cut enough spending to make any difference would be to destroy Medicare or Social Security (and I don't use the word "destroy" lightly - you'd be looking at cuts of over 50% to make any difference). The alternative is to raise taxes - and that is the option I have always promoted. I still define this as "austerity" since it causes pain, but it is not the preferred description of the word in these times.

What I have done, though, is change my position on the market's ability to recover properly. I would've been happy for Obama to cut military spending and raise taxes in order to run a small deficit (at the least) but do little else while the economy stumbles, falls and eventually recovers from my austerity package. Now I realise that the economy wouldn't recover - at least not quick enough to make any difference.

So here's my big government solution:

I would create the following long term or permanent programs:

America does not need to spend huge amounts on national defense. Of course it is important that some level of defense spending exist to defeat any potential attacker, but I am convinced that the most bloated, most inefficient and most corrupt sector in government spending is in defense contracting. Reducing military expenditure may not even reduce America's military strength, it will make the whole contracting system better.

In fact I would suggest a change in the way the whole contracting thing works. Rather than contracting out to companies who design weaponry and other military items, the government should actually do this themselves. Let's say we want to build the fictional B-5 supersonic stealth bomber. Instead of contracting out the design to Boeing, the design is actually made by government employees working in a government building somewhere. Once the design is complete, they then contract out the parts building to the defense companies - and ensure that common parts can be made by many different manufacturers in order to reward the productivity and profitability that would arise in a competitive environment. The B-5 could even be manufactured by different aerospace companies, with Boeing manufacturing some, Northrop Grumman some more, and Lockheed Martin the rest.

Higher Taxes - especially for the rich and corporations

There are many ways to achieve this - one way is to increase the highest marginal tax rate. Another is to introduce a Tobin Tax.

My preferred method of taxing the financial market would be to create a market capitalisation tax: public companies being taxed incrementally on a daily basis according to their market capitalisation (share price multiplied by amount of shares). In fact I would adjust the tax according to the average p/e ratio in order to punish over-investment - if the p/e ratio of the whole sharemarket is too high, then there will be an increase in the market capitalisation tax. If the p/e ratio falls down low, then the tax would also be lowered. This system would not only generate income for the government to balance its finances, but would also act as an "automatic stabiliser" for the financial industry - punishing the market if it approaches unsustainable investment bubbles, encouraging the market if it there is not enough investment.

Of course once the spending I have outlined above runs out over ten years (with the exception of Medicare and the tutor system), we would also assume that government debt would have been paid off by the increases in tax revenue. What then? Well I'm happy, once America has reinvented its energy, transport and water infrastructure, for taxes to drop. Hopefully the success of my "New Deal" would see so much economic and social success that Norquisters, Randians and Supply Siders would descend into obscurity. It would also force political conservatives to be more centralist, where they can be far more effective at promoting non-extremist conservative policies and ideas (conservatism does, after all, still have many considerable strengths once the extremism is removed from it).

So what are the chances of this occurring? Probably none. Rather, I expect the coming downturn to turn people against Obama and vote for a crazy Republican in 2012, ensuring a Republican controlled congress as well. What they would do from there is anyone's guess, but I doubt that any polices they do enact will do anything except make things worse.

Posted by Neil Cameron (One Salient Oversight) at 11:51

"What then? Well I'm happy, once America has reinvented its energy, transport and water infrastructure, for taxes to drop..."

One slight quibble -- I am inclined to think that there is a tax "tipping point" below which private influence will inevitably bring us back where we are now. Kimel's work puts that top marginal tax rate at somewhere above 60%.

Hi Noni. Nice to read a comment from you again.

My theory is that the economic changes since the early 80s - what is known as neoliberalism in some circles - has made a huge assumption: that the free market can provide more economic growth and prosperity if it is allowed to expand and capital controls are removed.

I think most of the industrialised world is in the midst of an investment bubble that is many decades in the making. It's the same as tulipmania, except the prices haven't risen as quickly nor have they crashed as quickly.

With money being ploughed into the marketplace and generating increased investment prices, what happens to that cash, except for it to be reinvested back into it. Asset prices rise while p/e ratios skyrocket. And this has gone on for decades, and it has affected almost every western industrialised nation.

So what happens is that eventually the economy slows. Nothing of value is actually being produced as more and more money is being thrown into a gigantic investment bubble. Economic growth drops. Less money is invested in labour intensive industries.

And the question is why? It's because the free market will always throw money at whatever will profit them most. And yet the returns that are made are illusionary since they rely entirely upon a continuing asset price bubble. Ponzi scheme indeed.

But getting around to your original point - IF the market wasn't investing in this gigantic investment bubble and if they actually did care about important things like revenue and p/e ratios, they wouldn't be creating this bubble.

In short I would see financial regulation as being the key here. Governments all over the world need to rein in the excesses of the free market.

And this doesn't have to mean high taxes (though it might have to).

Slowly, ever so slowly, the debt-hawks will come to understand Monetary Sovereignty and realize that federal deficit growth is absolutely necessary for economic growth.

When that happens, the debt hawks will say, "I knew it all the time."

Yes, obviously regulation is the problem, but that takes us back around to the problem of the influence that loose money has on the electoral and regulatory functions.

It is not possible to legislate and regulate if you are not elected, and now it's practically impossible to get elected, much less re-elected, unless you have access to haystacks of cash and the influence that comes with it.

To make things worse, what's different today than in the 30s is that most Americans cannot live without a paper income. They are hostages, so to speak, of the paper economy.

My parents' generation could hunker down by moving in with uncles, parents, or friends in a rural setting, planting or hunting or keeping a few chickens. Hardly a blissful way to live, but do-able.

And urban people, bachelors or other unattached folk, could rent rooms in boarding houses, an option which appears to have dried up due to zoning and licensing laws. As recently as 1965 my aunt ran a boarding home for poor veterans and other men down on their luck, a huge house where she had 6 to 10 at any time, feeding them well and keeping a sharp eye on them (my mental image includes a rolling pin here, not sure if any real rolling pins were involved.)

Though we seem, and are, better off than 50 years ago, we are also enmeshed in a financial system where access to a steady stream of cash is necessary, and where that stream's valve is controlled by and large by actors whose interests do not coincide with the well-being of the majority of Americans.

When the river from which those streams derive is controlled by only a few hands, the result is a nation of "free-range hostages." Not a free country by my standards.