The 14th amendment and the possible government shutdown

The president is said to have stalked out of the latest debt talks, which both sides have acknowledged as the most heated yet.

"This may bring my presidency down, but I will not yield on this," Mr Obama is quoted as saying.

The prospects of politicians reaching a deal to raise the debt ceiling are still in question after fifth straight day of talks.

Some econ bloggers have pointed out that the 14th Amendment of the United States renders the "debt ceiling" unconstitutional:

All the "debt ceiling" does is prevent the government from borrowing any more money beyond the previous predetermined limit. Since congress has the power under the constitution to legislate borrowing and spending bills, any self imposed limit on the amount of money the federal government borrows is entirely within their purview.

So what happens when congress doesn't increase the debt limit a "government shutdown" is initiated?

All it means is that the government will have to cut spending in order to fit into the amount of money they do receive. Spending must be cut. And if we believe that the 14th amendment will be followed, then we can assume that paying back interest and principal on money borrowed will not be affected at all. Instead, spending cuts will be made to other areas of government control. Spending on health care will be cut drastically. Military spending could possibly be cut. Social Security spending cuts would only occur if the spending is not considered "government debt".

My spreadsheet tells me the following about US government debts and receipts: 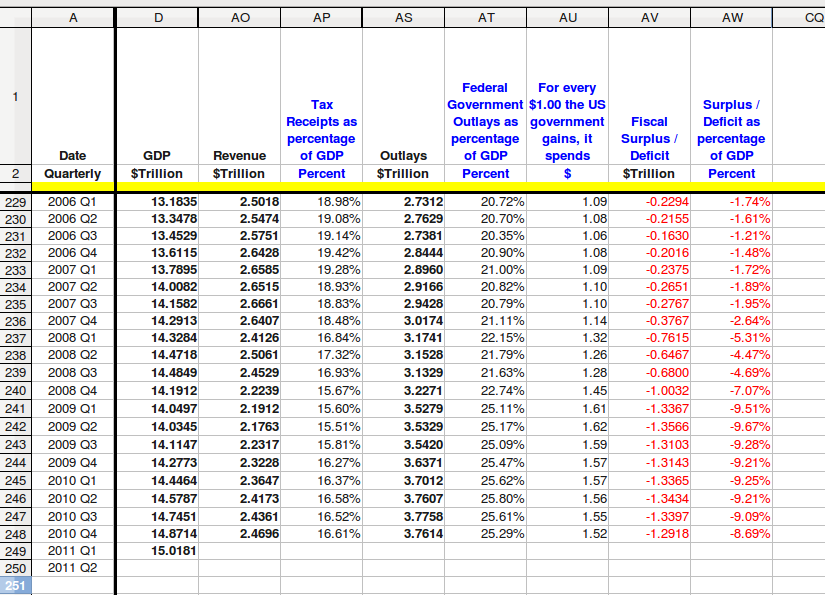 So if revenue represents 16.61% of GDP and spending represents 25.29% of GDP, then any failure to increase the debt ceiling will force the federal government into spending only as much as it gets. This would mean 16% spending instead of 25% spending. In short, it would reduce the spending size of government by around two-fifths. You can imagine how devastating such an action would be upon the economy.

But what about government debt? The last time I checked, interest paid on government debt made up around 2.8% of GDP. Even after a potential failure to increase the debt ceiling, interest on treasury bonds and other debts will have ample room to be paid back.

A failure to raise the debt ceiling will most certainly shrink government spending, but it will not result in debt default. The unemployed will no longer be given payments, Medicare will grind to a halt, NASA will disappear, even social security has the potential to be scaled back... but at least those who lent the government money will get their interest - hardly a cause for celebration.

To summarise the 14th amendment on this issue: The amendment doesn't invalidate a debt ceiling, it just ensures that government debt will be paid off even if any debt ceiling isn't increased.
Posted by One Salient Oversight at 11:48

Thanks for sharing a nice article.Wireless Security Consultants’job description can include a variety of different tasks.Companies need experienced professionals that can take care of every aspect of wireless network security.

All your banking hassle, your payments, and receipts are taken care of. It is, in fact, a single-stop solution to all your monetary transactions. One of the two best things about PayPal is its instantaneity. You don’t have to worry about the transaction getting failed, or taking way too much time. Another thing that makes PayPal worthy is its service availability across the world. It follows you wherever you go to make your life easier and quicker. Let’s discuss steps to making an account, and resolutions to PayPal login issues.
PayPal login |
www.amazon.com/mytv |
Cox login |
Xfinity Login |
DirecTV login |
geek squad support |
geek squad appointment

Thanks for sharing a great article.
You are providing wonderful information, it is very useful to us.
Keep posting like this informative articles.
Thank you.

Get to know about 123movies