This diagram comes from The Oil Drum: 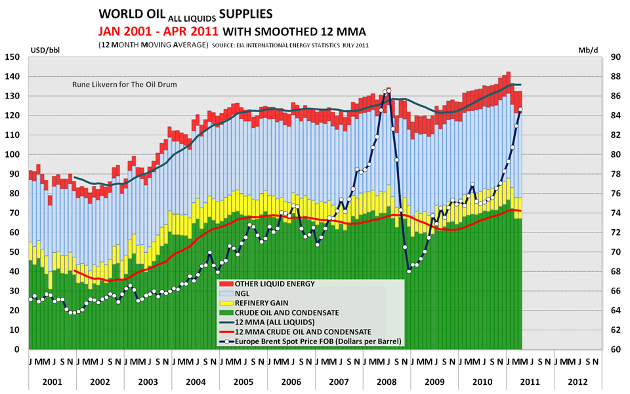 I was initiated into the world of Peak Oil some time in 2004. Initially I thought it was a bunch of scary tinfoil hat wearing nonsense - partly because some tinfoil hat wearing people were promoting it (not you Dave!). The deeper I dug, however, the more the evidence piled up. The tinfoil hats were replaced by serious looking academics with qualifications from reputable universities and experience working in petroleum geology. They pointed out that data consistently showed that individual oil fields had an oil production rate like a bell curve, and that less and less oil comes out once the "peak" of the curve has been reached  - which usually comes when the oil field is half empty.

The problem was, and still is, that many are under the false understanding that oil supplies will simply run out suddenly. They are buoyed by market reports showing that oil reserves have another 100 years production left in them. Thus they are ignorant of the fact that, when the majority of the world's oil fields reach 50%, worldwide production will drop.

The graph above shows very clearly that this moment has arrived. Depending upon which metric you use, oil production has either reached a plateau now, or reached one about five years ago.

Being an econophile before I understood Peak Oil, I naturally assumed that price signals would motivate the market to increase production. Yet if an increase in production is geologically impossible what happens when demand increases? When supply is constrained and cannot rise to market demands, what happens?

Simple: Production remains the same, while prices skyrocket. The graph above shows this phenomenon so clearly that you would have to be cognitively deficient not to notice. Some time in 2004 the price of oil begins to rise due to increased demand. This demand was not met by an increase in production, as the graph shows. Oil production then simply sits at the same level for some years. Oil producers are literally unable to pump the stuff out fast enough to meet demand. Oil prices double from their 2004 levels. Then they triple. Then they reach a peak in 2008 before demand destruction hits - the Global Financial Crisis.

Since then prices have dropped. But notice that they have begun skyrocketing again.

Many years ago I blogged about a "perfect economic storm" to hit the US. While I didn't know the date I knew that it would happen. I knew that Peak Oil would be the major cause. What I didn't realise was the extent by which the US economy had over-geared itself and when this occurred I became far more worried than I had before. It was as though I had predicted the arrival of the largest category 5 hurricane in history, only to realise that it would be a category 6 hurricane (which doesn't exist of course, but that's not the point).

Scientists have proven the existence of Peak Oil. The evidence is clear and unambiguous. Moreover it has been experienced by the entire world economy for the past 7-8 years. What more evidence is needed?

And until we wean ourselves off oil, the lag on economic growth will continue. Policy decisions needed to be made in 2004 and weren't. They need to be made NOW.
Posted by One Salient Oversight at 19:11