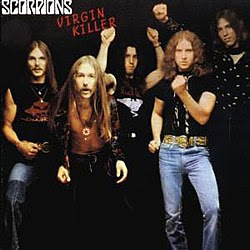 Two interesting internet events have happened in the past couple of days - both of which are a result of an unrestricted format butting up against national child pornography laws.

The second case occurred in Australia where a man who had images of naked Simpsons characters - including the children - found on his hard drive. Many of these images were of a deliberately sexual nature.

Yet I have to say that there are some rather important issues that have been raised as a result of these two recent cases.

Consider the poor Scorpions, that German Heavy Metal band with the tasteless album cover. Even back in 1976 the cover was controversial and they were forced to change it (to the one shown above). In hindsight I'm sure that some of the band members are probably regretting their decision. Yet even so, images of the original cover can be found throughout the internet, not just at Wikipedia. Moreover, the album image is also shown in books that can be legally purchased. If the UK has decided to censor that particular image then they should be consistent and prevent access to the album cover from all websites. They should also ban the sale of books that contain that image as well.

The case of the naked Simpsons images is no less problematic. The fact is that the characters depicted in the images are cartoon characters and are not just fictional but have no bearing to real life. Yet at the same time there are images of Bart, Lisa and even Maggie engaged in sexual acts.

But this issue gets even worse when you consider the fact that the characters of both Bart and Maggie have appeared naked in official Simpsons animation, not just in the sick minds of internet artists. Anyone who has seen the latest Simpsons movie knows that one of the more humourous moments involves Bart skateboarding in the nude, the highlight of which occurs when objects just "happen" to pass in front of his genitalia as he skateboards along that prevents us from seeing them... only for his entire body to disappear behind a hedge with only his penis visible (see bottom image).