The Fed is going Nuclear 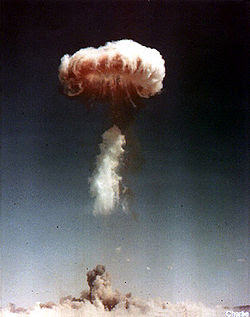 Treasuries rose, pushing the yield on 10-year and 30-year government securities to near record lows, on speculation the Federal Reserve will cut interest rates and announce plans to buy U.S. government debt.

The 30-year yield fell to 2.95 percent, close to the lowest since regular sales began in 1977, and 10-year notes dropped to 2.47 percent as investors sought the highest returns on the safest government securities. Ten-year note rates were 176 basis points more than on two-year debt, down from 253 basis points a month ago.

“We expect the Fed to go all the way to zero, and that will surprise the market,” said Axel Botte, a strategist in Paris at AXA Investment Managers, which has $800 billion in assets under management. “The market may rally” further.

I suggested this course of action a few weeks ago, so either someone from the Fed reads my blog or fools never change.

Such an activity - creating money and buying back debt - helps to both reduce government debt while simultaneously preventing deflation.

The problem is, though, that in the current climate such an activity would be the same as pushing up the p/e ratio of debt.

As you know, shares have two methods of rewarding investors. The first is payment of dividends. The second is its price. When the latter dominates, you get an asset price bubble - the money returned on investment is low compared to its increased value.

The same is true of property. People purchased property over the years because its value kept going up and up. In fact, property investors weren't too concerned if renters in their investment properties didn't pay enough rent to cover the mortgage since, in the end, the increasing value of the house was the most important thing. As a result, an asset price bubble occurred.

So now we have the possibility of the Fed buying back debt. Notice that the interest paid on such debt is now so low as to be almost negligible. But if the Fed buys back such debt then the market will simply respond to it in the same way by overvaluing the asset.

So what could happen? A US dollar boom the likes of which history has never seen. Faced with a booming currency, deflation will increase, forcing the Fed to pump more money into buying debt, causing the market to value government debt even more, and the cycle continues...

Until one day the market eventually realises that the US Dollar is just another dot com boom and housing bubble, and will crash. Alternatively the market may react to the Nuclear option straight away and begin devaluing.

The only way this could be prevented is if foreign central banks enacted similar policy - print money and pay back government debt in a deflationary environment. I can't see that happening any time soon.
Posted by One Salient Oversight at 23:10