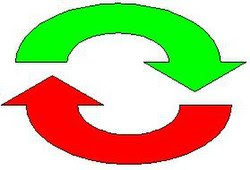 One of the structural problems that has brought the American economy (and, as a result, the world economy) into crisis is its dependence upon consumption. This problem is also exacerbated by the fiscal and monetary tools that are used to regulate the economy which are able to constrict or stimulate domestic consumption but not external demand.

America has an unsustainable current account deficit. This was always an indicator of troubles brewing. Borrowing overseas money to fund its overseas purchases is not necessarily a problem - but its comparative size is. In America's case, it was worth about 5% of GDP for the past few years. That is unsustainable, even for a large economy like America.

China and Japan, by contrast, are not economies that are consumption based, but production based. In other words, America's consumption is matched by China and Japan's production, and America's borrowing is matched by Japan and China's saving. Now that America is in recession and consuming less, the demand for Japanese and Chinese goods has dropped, leaving these economies in recession too.

So far the only thing the US Congress has done - and has promised to do - is to stimulate consumption. Yet while this may have the short-term effect of boosting the economy, it strengthens the consumption/production imbalance between the US and Japan/China. The US economy may certainly experience some form of relief while congress stimulates consumption - and this relief will also be experienced in Japan and China as production orders for American-bound goods increase. But the problem remains.

Balancing the current account is essential if future problems are to be avoided. This means that America needs to produce more, save more and consume less while China and Japan need to consume more, save less and produce less.

Here is my solution:


The beauty of this alternative stimulus is that it takes into account both the short term (the need to limit short term economic contraction) and the long term (a balancing in the current account, which is an indicator of structural problems in the economies of Japan, China and the US).

The idea of entrusting Japan and China with America's economic well-being may stick in the throat of many. The fact is, however, that the world economy is linked and that the fiscal and monetary tools used by central banks to regulate the economy are limited to adjusting consumption rather than production.

Of course, this "alternative stimulus" doesn't take into account important things such as government debt (which is too high in both Japan and the US) or investing in reducing oil demand and greenhouse gas outputs. They can be added on at some point.
Posted by One Salient Oversight at 11:02

Aren't the Japanese rates at a all low already??

True. In which case the Japanese solution would be to print money and either use it as a stimulus package or else pay off government debt.

Lowering interest rates increases the money supply. If the money supply isn't rising fast enough and rates are at an all time low, then simply creating money is a solution (especially in a deflationary environment, where such an action would be welcome)