Am I the cutting edge? 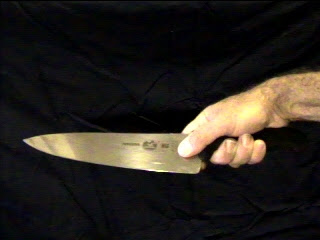 The collapse of Communism as a political system sounded the death knell for Marxism as an ideology. But while laissez-faire capitalism has been a monumental failure in practice, and soundly defeated at the polls, the ideology is still alive and kicking.

The only place you can find an American Marxist these days is teaching a college linguistic theory class. But you can find all manner of free market fundamentalists still on the Senate floor or in Governor's mansions or showing up on TV trying to peddle the deregulation snake oil.

It's time to drive the final nail into the coffin of laissez-faire capitalism by treating it like the discredited ideology it inarguably is. If not, the Dr. Frankensteins of the right will surely try to revive the monster and send it marauding through our economy once again.

The fact is that the strict free-market capitalism that is promoted and adhered to by its ideologues in the US is as empty and as inefficient as the strict communism that was promoted by Soviet ideologues back in the 1970s. What is needed is a recognition that government and private enterprise can and should exist side-by-side in a truly free society. The market cannot produce from itself things like universal health care, law enforcement and public education - in the same way that the government cannot efficiently produce the raw materials, services and consumer goods that the market is so good at controlling.

A more plausible route to sustained recovery would be a drastic reduction in the U.S. trade deficit, which soared at the same time the housing bubble was inflating. By selling more to other countries and spending more of our own income on U.S.-produced goods, we could get to full employment without a boom in either consumption or investment spending.

The world economy therefore needs the United States to consume less, and for China and Japan to consume more.

(bitter self promotion is now over)
Posted by One Salient Oversight at 17:02

The only evidence that Huffington has that laissez faire capitalism hasn't worked is the following: 1) she opposes laissez faire; 2) bad things are happening in the economy; 3) therefore, it must be the fault of laissez faire. 4) QED.

Huffington is a twit. What evidence does she have that laissez faire capitalism has been disproven, or even tried? The absence of government regulations would be some such evidence, but she doesn't have the sense to find out if that's the case. And really: which Senators have advocated laissez faire capitalism on the floor, and actually proposed laws that eliminate government regulations? I don't think there has been one since Phil Gramm.

Oh, and don't mistake my comments for advocacy of strict laissez faire. Rather, they are advocacy of using terms properly, and identifying the real sources of problems, not blaming boogie men favored by socialites.

I will give her this, though: at least she didn't blame the Jews.

Besides being not precisely accurate, paragraph 2 was in rather poor taste. Are you sure you know what neo-liberalism entails?

I'm sorry John, I'm not sure what you're saying?