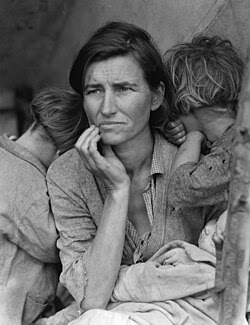 Amity Shlaes over at the Washington Post outlines five ways to wreck an economic recovery, based upon research into the Great Depression. They are:
Some of these points are interesting and worthwhile. Some, however, I would disagree with.

The first is the assumption that markets function better than government at virtually every level when it comes to economic performance. In relation to the Great Depression, Shlaes exonerates the market almost completely in her article and places the blame squarely upon "perverse monetary policy" as the real cause of this economic downturn. In other words, the market was fine, but the government (as the Federal Reserve) was the real cause. While there is no doubt that monetary policy during the great depression was pretty awful, to assume that policy makers at the time had a credible option in lowering rates is to be anachronistic. The fact that the tight monetary policy at the time exacerbated the depression so intensely is now widely understood. What Shlaes forgets to mention is that an unsustainable explosion in business and personal debt in the years leading up to the 1929 stock market crash - a terrible failure in market behaviour - was a major cause as well. It seems reasonable to assume that, in the current case, the popping of the subprime bubble is a similar example of serious market failure.

The second assumption Shlaes makes is the implied belief that government fiscal policy should not interfere with the market's ability to "right itself". While I agree that the marketplace that is a national economy can and does have the ability to stabilise itself, arguing that the government should neither raise taxes nor increase spending is to argue that the government has no real role to play in the way an economy functions or how an economic recovery can be managed. The government is thus relegated to being some sort of strange entity that needs to be silenced so that money can talk. Of course, such an attitude can be quite typical of "small government" types but is less prevalent amongst mainstream economists and modern society.

John Maynard Keynes, one of the 20th century's most important economic thinkers, deduced that governments should counter market trends when it came to fiscal policy. In practice, this meant that whenever an economy contracted, government should increase its operations to the point where it was borrowing money to fund a deficit; conversely, whenever an economy expanded, government should decrease its operations and aim to run fiscal surpluses. Throughout the course of the business cycle (whereby the economy expanded and contracted) government fiscal policy should be essentially neutral so that deficit spending is balanced out by surpluses. Keynes, of course, came up with this policy as a result of his study into the great depression. So when Shlaes says that governments shouldn't expand their operations during a downturn, she is essentially at odds with Keynes.

When it comes to raising taxes, however, Shlaes is only partially correct. All things being equal, governments should not seek to increase tax rates during an economic downturn - a lesson that all industrial governments painfully learned from their great depression experience. Unfortunately, in the current case, all things are not equal. If it is true that governments should not raise taxes during recessions, then it stands to reason that governments should not lower taxes during economic expansions - yet that is precisely what George W. Bush and the congresses under him have managed to do. The result of this structural budget deficit is a dangerously growing level of public debt. The only way to rebalance this situation is for the government to run fiscal surpluses, which means that tax revenue must exceed expenditure. Raising taxes is one of doing this. Another way is to cut government spending (a process that would probably have the same economic effect as a tax rise - an economy contracting faster as a result of less government spending). Another way is a combination of the two. A fourth way - printing money and be damned - cannot be seriously considered.

The problem with this current economic downturn is that it has occurred during a period in which America's Federal government has been fiscally irresponsible. Thus any room that can be made for fiscal "pump priming" (Keynsian spending increases or tax cuts) is just not there. Interest paid on US public debt is already larger by far than NASA, the Department of Energy, the Department of Eduction, the Department of Agriculture and the Department of Veterans Affairs combined. Moreover, interest repayments are already rivalling defense expenditure. This massive fiscal black hole cannot be made bigger through tax cuts and spending increases without serious medium-long term consequences. National bankruptcy can never be declared - but the effects of a fiscally irresponsible government will be felt in increasing levels of private and personal bankruptcies and decreasing levels of economic growth.

Counter to Shlaes' warnings, I would argue that a repeal of many of Bush's tax cuts (especially upon the rich) along with a severe cut in defense spending (say a cut of between 10-20%) is absolutely essential if public finances are to be rebuilt over the medium-long term. Without a sudden turnaround in the US Economy (a process which would lead to higher levels of tax revenue), government debt will continue to increase.

Sadly, however, I can't see much evidence that Bush, Congress or even Obama and McCain are concerned about this situation. While the Republicans are pretty much the party that got America into this fiscal nightmare (most of the current deficit resulted from decisions made between 2000 and 2006 when congress was more or less controlled by the GOP) I am not confident that Democrats have the testicular fortitude to solve the problem and make the changes necessary to return public finances to a more sustainable position (especially considering the post-2006 congress which is more or less run by Democrats who could have actually done something about it).

Then again, are we surprised that politicians make wrong decisions? No. But why can't it be different?
Posted by One Salient Oversight at 19:52

I read Shlaes article and I believe she got it generally right.

I could not understand how Congress could go along with a tax cut during a war, but why would cutting defense spending 10-20% be the thing you endorse? Wouldn't cutting all spending 10% be even better? Or, wouldn't eliminating all non-essential spending, etc.? Why did you happen to pick defense if you recognize that it would have a harmful effect? I am convinced that more than 20% of the federal budget contains spending that could be cut which would not result in harm to the economy.

Singling out defense seemed like an odd choice, given all the other options.

Oh, and I believe it would be helpful if you were to define your use of the term "market failure". Your post asserted it, without demonstrating why you believed the pre-1929 debt explosion was a market failure.

I focus on cutting defense spending for a number of reasons.

1) Defense spending, in relation to most other government departments, is huge. Only Health and Social Security are bigger in terms of the sheer amount of money. If any dent is to be made in government spending, it has to be in the big spending areas. NASA, D. of Education, D. of Agriculture etc are just too small to worry about.

2) Defense spending has also increased substantially since 2001 - a lot of it due to Iraq. What has been increased can be decreased.

3) Defense procurement and the development of new defense technology is bloated and inefficient.

------------
The pre-1929 debt explosion can be described as a market failure because the market itself created the conditions for it to fail.

In essence, I'm attributing the blame for the great depression squarely on the market (while also acknowledging that the government had a role as well)

I don't understand how "the market" can create anything. It has no volition of its own. People act based on their desires and those actions are influenced by and reflected in the market through prices.

In my opinion, what you've described as market failure isn't. A market failure would be where goods and services do not go to those who value them highest in at least as efficient a manner as government fiat (to pick one market alternative).

Functioning markets always tend to clear out surpluses through lower prices and ration shortages through higher ones. If government policy prohibits or hinders that action (as evidenced by the high unemployment during the Depression), then that can not rightfully be called a market failure.

I don't question your general premise that spending should be cut: that has been my argument all along.

I just believe there are scores of areas where the government is even more bloated and ineffectual and even harmful than defense spending, particularly during a war.

I describe the great depression as a market failure because at its source was an action of the marketplace. The government may have been in error in some of its responses, but the build up of debt, the eventual crash of the share market and the subsequent years of poverty and misery that followed was due to the market's actions.

And that means that the market failed in that particular instance.

It is probably true that all forms of government spending could use a little more efficiency.

But, as I pointed out, the reason why I target defense is because it represents such a huge proportion of government spending these days. Cutting spending in other government departments will be useless in the face of such a large deficit. Click on this link to see a) just how massive defense spending is as part of the US budget, and b) just how large are the interest repayments on money owed. With such massive amounts of debt, it seems only logical to make massive cuts on major spending areas.

I mean, even if the Federal government completely shut down NASA and completely got rid of the department of education, there would still be a massive deficit.

I describe the great depression as a market failure because at its source was an action of the marketplace.

That's where our basic disagreement lies, I believe.

The subsequent years of poverty and misery were due to government policies that inhibited or prohibited the liquidation of bad investments, constricted the amount of money in circulation, and confiscated the people's one remaining store of value (gold). To add insult to injury, the government prohibited the price of the major input - labor - to fall to a market clearing level despite widespread real deflation reflected in the decline in prices of nearly all other inputs.