Couldn't have said it better myself 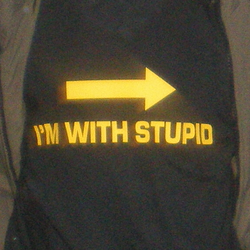 From the department of copying the US in new and exciting ways:

As I mentioned a couple of posts back, the claim that mainstream science is totally wrong about global warming is an orthodoxy that is almost universal among commentators, bloggers and thinktanks on the political right in Australia, even though the great majority of ordinary Australians, including Coalition supporters, believe the science.

The great majority of Australians,, take the view that, while scientists aren’t always right, it’s much better to act on the basis of the best available science than to assume that the scientists are wrong. For this, they are attacked by rightwing commentators as religious fanatics or, at best deluded innocents.

One limited exception to this appeared to be the Centre for Independent Studies. A while back Andrew Norton got stuck into Clive Hamilton for listing CIS in the delusionist camp on the basis of some fairly tenuous links. As Norton observed, the CIS had never published much on the topic (though what it did publish was in line with delusionist orthodoxy) and had published nothing since 2003.

CIS has made up for it now, with this piece by Arthur Herman (also published, less surprisingly, in the Oz). It’s got everything - “global warming as a religion”, Al Gore conspiracy theories, Godwin’s Law violations on eugenics, the Spanish Inquisition and so on, backed up by some typically dodgy Internet factoids. As with much in this genre, it’s important to note the call for the replacement of science, as it currently exists, with “real science” in which people like Herman (self-described as an historian) will lay down the rules.

What’s striking here is the contrast between the willingness of just about everyone on the political right to sign up to a set of beliefs that are dictated entirely by political tribalism and their self-perception as brave heretics, spelt out in more than usually ludicrous fashion by Herman.

When politics trumps reality, reality eventually bites... hard. Any political commentator who chooses to deny reality will one day find that no one wants to read their political comments any more.
Posted by One Salient Oversight at 16:39

If, as you say, the great majority of Australians believe the GW science, then they must be like lemmings marching to the economic cliff's edge. But this cannot be!

I don't believe your words.