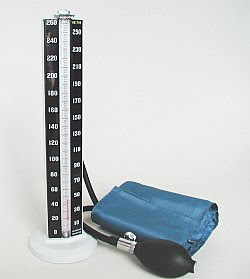 So, what's this got to do with Peak Oil? Well, allow me to make the following important assertion:

The economic stress caused by Peak Oil will not be quantified by how high oil prices rise, but by how low oil prices don't drop.

Okay, so the allegory goes like this: Oil prices are like blood pressure in that the record price of oil ($147.27 on 11 July 2008) represents a systolic price - the maximum price of oil that the market is willing to pay under current economic conditions. But, with the clear presence of demand destruction caused by current economic strains (including the effects of high oil prices and the subprime meltdown to name just two), the price of oil is now dropping.

But, just as a diastolic reading can be too high, so can the price of oil when it falls. If Peak Oil is true and there is a geological limit to how much oil can be extracted, then it stands to reason that this will not just create record high oil prices, but also oil prices that are too high when demand has fallen.

(Of course, as Neil from the Young Ones points out, "some metaphors don't bear close resemblance". One problem with the allegory I am using here is that low blood pressure is a serious health risk too, whereas extra low oil prices are an economic benefit, all things being equal.)

This problem was brought home to me today by a post from The Energy Report titled "Rider of the Storm":

It seems like Mother Nature is the only thing supporting this market as demand destruction might have more long term impact on the market than anything Gustav can throw at us. Even after Katrina oil demand dropped and so too did prices....

Take for example the news from the Energy Information Agency that revised downward its June oil demand by a stunning number. The EIA said that US oil demand in June was 793,000 barrels a day less than previously reported. That is down a whopping 1.17 million barrels a day from the same period a year ago and the lowest level for any June since 1998. That comes out to be 5.6% less than a year ago....

What is becoming clear to the market is the demand pullback in the US is rising to the level of historic proportions. Even the EIA is now saying that the drop in demand should send oil below $100 a barrel. The Chief of the EIA, Guy Caruso, said that prices could fall below $100 a barrel on slowing global demand and rising production in the US, Brazil and Canada, and from OPEC states such as Saudi Arabia and Angola. While Caruso said "most of the risk is on the upside," and that it was not the official EIA prediction but added that a scenario of falling oil prices is "now closer to 50-50" if worldwide spare production capacity continues to increase from the current 1.5 million barrels per day (b/d) to 3-4 million b/d while global oil demand softens. Caruso then says that that scenario is now more realistic than any time in the past five years.

That's a pretty serious revising of figures. What it indicates is that high oil prices in the last 12 months have caused major shifts in market behaviour in the US economy. Not only are people buying less vehicles, but people are driving less. We are now seeing the natural result of high oil prices - a drop in demand. This is a classic economic phenomenon - when demand begins to outstrip supply, prices rise and demand drops. This is the sort of phenomenon even economists in the 19th century were well aware of.

Back in the early days of Peak Oil awareness (say, 2004 or so), it was very common to read articles by peakniks declaring that oil prices could actually rise to over $100 per barrel. At the time they were laughed off as cranks and idiots (me being one of those who laughed derisively at the prediction). Well, of course, the peakniks were right and no one's laughing now.

Even so, back in those days were some rather extreme peakniks who did start flirting with the idea of $1000 per barrel. These extreme peakniks (of which I vaguely remember and thus have no direct link to back up my assertions) were probably quite unaware of economic factors like demand destruction. Fortunately, as Peak Oil began to grow in public awareness, its ideas matured as judicious experts began to critically examine both the realities of geology (Hubbert's Peak) along with basic economic theory. "Demand Destruction" therefore became a mainstream idea amongst Peakniks in the last 2 years, and this has, again, been borne out by the data just released by the EIA.

Back in July I stated that I expected that oil would drop below $100. I am now even more firm in that idea and if oil breaks below the $100 barrier this year I will not be surprised at all. Demand destruction (America and other countries using less oil) will result in a drop in the oil price.

But, of course, that is expected. Even without accepting Peak Oil, a lowering in the price of oil was always going to occur. Peak Oil ignorant commenators and "experts" will probably use this latest report to prove their assertions that the high price of oil is merely the result of "speculation" and can be lumped together with the entire commodities market. In their minds, oil and commodities will, at some point in the next few years, return to "normal" levels.

So, same data, different conclusions. But it will be the next two years that will vindicate Peakniks - not by some magical rise in the price of oil back to $149 per barrel again, but by the stubborn refusal of the market to lower the real price of oil back to pre-2004 levels.

So what will the price of oil be? That depends, of course, in just how far the world economy contracts. A real price of $40 per barrel may actually be reached again - but this price will still be too high for the market to consider reasonable. And when the world economy begins its recovery (as is inevitable), then any increased economic activity will be severely limited by relatively high oil prices occurring again. And these prices don't have to be up around record levels to stunt any recovery - they may still be below $100 to make life difficult for the market.

It may well be that $147.27 per barrel remains the permanent oil price record. While this may be a long way away from $1000 per barrel predictions which floated around Peakniks back in 2004, and even a long way from the $200 per barrel mooted by some experts recently, it will not somehow prove that Peak Oil was wrong. The market will always price goods and services by taking many factors into account. The world economy in 2007 may have been able to continue when oil prices reached $75 per barrel, but may not be able to handle a $75 price in 2010, even when taking inflation into account.

So, to summarise my prediction - I predict that oil will drop below $100 in the next 12 months, but remain too expensive for the market to be happy with over the next 3 years.

And that, of course, will keep the diastolic blood pressure of the economy at dangerous levels.
Posted by One Salient Oversight at 12:10