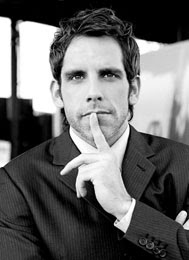 Ben Stiller is not my favourite actor. With the notable exception of Mystery Men and that stupid Return of the King Easter Egg, I own no DVD in which Ben Stiller is present. And I'm proud.

To me, Ben Stiller represents all that despise about Hollywood. He appears in films that I find turgid, desperate and mechanical - typical 21st century Hollywood cookie cutter comedies that are big on simplicity and small on sophistication. Call me an elitist if you wish, but I am certainly thankful that I don't have to look forward to the next instalment of Ben Stiller's terrible acting career.

Stiller's latest movie, Tropic Thunder, is one that I will probably never see. Any film with Stiller's presence automatically means that I won't view it (other actors whose presence means danger are Tom Cruise, Val Kilmer and Michael Douglas).

Tropic Thunder, however, is not looking like just another Ben Stiller picture. The film seems to be upsetting all sorts of people at the moment. Is this a good thing? Are people finally saying "no more" to Ben Stiller? No. They're annoyed at how the film treats people with intellectual disabilites and the usage of the "r" word - retarded.

In order to understand where these people come from, I have had to actually read some of the film's script and have even viewed a segment of the film that was deemed to be problematic. To be honest, watching Ben Stiller and listening to his dialogue was a more disturbing experience than, say, looking at actual war footage from the current conflict in Georgia. Nevertheless, I pressed on and this is what I found.

Tropic Thunder is about 3 method actors (Stiller, Jack Black, Robert Downey Jr) in a war film. For whatever reason, the film's director decides to give them real guns and places them in a real conflict in some tropical area of the world where they are left to fend for themselves. All three actors are Prima Donnas - exactly the sort of actor everyone loves to hate. They are self obsessed, oblivious to the real world and demand all sorts of attention. Stiller's character, Tugg Speedman, had just played an intellectually disabled person in a previous film called Simple Jack. While walking along in the jungle, Stiller's character speaks to Downey Jr's character about the difficulties in playing "retards" on film.

It is that scene that has made people angry. In the Washington Post, Patricia Bauer argues that such a scene has done untold damage to intellectually disabled people in America. Bauer and others seem to believe that this dialogue will increase the proliferation of negative stereotypes and lead to difficulty in getting intellectually disabled people accepted into society.

The problem with Bauer and others is that they are aiming at the wrong target. Tropic Thunder, for starters, is hardly going to change community attitudes on anything (except reinforce the market for bad films and the career of Ben Stiller).

The use of the word "Retard" by Stiller and Downey Jr in the film is designed to be confrontational. It is a situation in which two people are using a negative word quite freely - a word that is not used much in today's conversations. The conversation is supposed to make the audience unsettled. Why? Because it highlights the vapid and closeted nature of the characters. In other words, the use of the word "retard" actually makes the Stiller and Downey Jr characters less likeable in the audience's mind. The joke is on them.

Imagine, if you will, a film in which racist behaviour in America's Southern states is a main theme. Imagine that we see a bunch of white men talking about "niggers". Of course, in a film like this we should naturally hear racial epithets being used as the characters depicted are trying to be faithfully recreated. The fact that racist attitudes and racial epithets are present in a film in which racism is a major theme should not surprise us.

Tropic Thunder does not depict Moses or Jesus or George Washington referring to intellectually disabled people as "retards" - it depicts two obviously selfish, self absorbed individuals describing intellectually disabled people as "retards". Therein lies the difference - the usage of the epithet in the text is by characters that are depicted in a negative way. Thus, if there is any message from this part of the film, it is that only stupid and vacuous people call others "retards" - and that has to be a good thing.

(Note: I have worked with intellectually disabled people - I used to be a workplace trainer for a non-profit disability services organisation called House With No Steps)
Posted by One Salient Oversight at 17:10

It does sound Disturbed. I looked through Ben Stiller film list and none reminded me of any glee or joy or admiration of acting skills

I did have a giggle at some moments in the 1st Fokker film but that was I think due to De Niro. The 2nd film was most strange and tasteless why did Dustin get involved. Niro presumably because he was in the first.

However I have seen some very good Val Kilmer films - recently Deja Vu but the main part was Danzeel but Val seems to be in ok films.

And Cruise does appear in good films. Tom was excellent in Collateral

I liked "Minority Report" but my liking that film was more about freaky concepts than Tom... could have been another actor and I would have still liked it.

Neil, I agree with your argument about the use of the 'R' word. Stiller seems to enjoy writing comedy that sends himself up, causing untold embarrassment for the viewer on the character's behalf. It's comedy with the 'squirm' factor.

What has me troubled is not so much Ben Stiller — there is always the 'squirm factor' which sometimes works (for me, as in Mystery Men and Zoolander) and sometimes doesn't. However, what really scares me is that Americans are reacting to Ben Stiller as if he's offended intellectually disabled people! As you point out they just don't get it. He's offending those who offend the intellectually disabled. It's a parody of the insensitive. It worries me that the protesters cannot make that distinction. Or maybe they can, but are choosing to ignore it and are using the movie to raise the profile of their cause? 'Reacting loudly' is a good way to gain media exposure for your thing, whether or not you are actually offended.

Ben Stiller is not my favourite actor. With the notable exception of Mystery Men and that stupid Return of the King Easter Egg, I own no DVD in which Ben Stiller is present. And I'm proud.
This is a funny statement, like saying "I don't own ANY Ben Stiller movies, except 2 of course."

It's not about whether Ben is a great actor or not, it's about whether the audience enjoys 'squirm humour', or jokes being "stomped to death" — (from the NYT review). The point about Tropic Thunder is whether or not you enjoy squirming. And while I don't, I might laugh at my friends squirming — but I'm kinda sick that way! (As you know from High School days!)

I can't say I'm a fan of Ben Stiller, nor can I say I'm a Stiller hater. I very much enjoyed "Meet the Parents", though. It was one of a small number of movies which caused me to laugh out loud. (That might be the topic of an entertaining post, Neil: Laugh Out Loud Movies).

Ben's parents are two of the funniest comic actors out there, so Ben likely has some comedy genes that just need some parental guidance, perhaps.