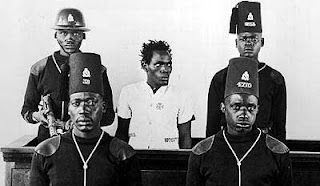 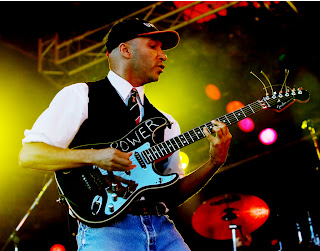 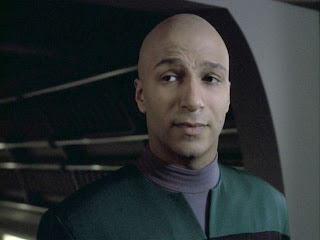 Posted by One Salient Oversight at 11:01

Well, since no one cares, I'll post the solution.

The top picture is that of an Irish-Italian political activist by the name of Mary Morello. In 1987 she started an anti censorship group called "Parents for Rock and Rap".

The second picture is a bit misleading. It's the trial of a Mau Mau rebel in Kenya. One of these rebels (not the person pictured) was named Ngethe Njoroge, who, after the Mau Maus won, became the first Kenyan Ambassador to the United States.

Mary Morello and Ngethe Njoroge married, and they had a son.

The son is named Tom Morello, and he was the lead guitarist for Rage Against The Machine and Audioslave.

Tom Morello occasionally acts in films or TV shows. He played an alien in a Star Trek film, and in 2000 he appeared in an episode of Star Trek Voyager.

I guess I keep the Euro.