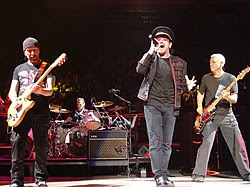 Where the streets have Dutch names:

Protesters have demonstrated outside the Department of Finance against U2’s decision to move their tax affairs to the Netherlands to avoid paying tax on their royalties in Ireland.

The protest was organised by the Debt and Development Coalition Ireland (DDCI) which campaigns on issues related to the developing world. The coalition contains such organisations as, Trócaire, Oxfam and various Catholic missionary orders.

U2 moved their publishing arm to the Netherlands in 2006 after the Government capped tax-free earnings for artists at €250,000. Previously, U2 had been one of the biggest beneficiaries of Ireland's tax-free status for artist royalties.

The coalition met Minister for Finance Brian Lenihan who pointed out that the Government had abolished the Cinderella rule where people could say they had not spent a day in Ireland if they left by midnight.

“We have tax treaties with other countries that regulate where you pay tax. There is a problem with smaller countries that have to set up deliberate tax havens. We are raising that at EU level,” the Minister said though he did not address the specific issue of U2’s tax affairs. The band are resident in Ireland for tax purposes.

Accounts for 2007 for U2 Ltd show the band paid out more than €21 million in wages in 2007 in a relatively quiet year where they were not touring or releasing new material.

Bono impersonator Paul O’Toole reworked the lyrics of I Still Haven’t Found What I’m Looking For to mock the band’s decision. “I know avoiding tax ain’t fair/it’s just because I’m a millionaire, I don’t need to pay like you, no, I won’t pay like you/because I still haven’t learned about democracy.”

Mr O’Toole said: “Their music does not bother me. It is their policy of avoiding tax that bothers me. Bono talks about dead kids, but he won’t pay a penny towards it.”

Mr O’Toole posed with a mock-up of a donation to the world's poor in one hand and a large sack of unpaid tax in the other.

The DDCI is following it up with the launch of an “international song contest” inviting re-worded versions of U2 classics to highlight the band’s stance on tax.

It is timed to coincide with the release of U2's new album No Line on the Horizon which goes on sale at midnight on Friday.

DDCI co-ordinator Nessa ní Chasaíde said the decision to holding the protest outside the department of Finance was to highlight the fact that U2’s tax avoidance measures deprives the Irish exchequer of taxation revenue that could be spent on development aid.

“Bono has championed the call for increases in aid to impoverished countries, yet in his personal life he is engaged in tax avoidance issues and it is tax avoidance that is undermining the possibility of developing countries fighting their way out of poverty,” she said.

“The practice of being able to move your finances around easily and without high levels of transparency is extremely problematic for developing countries. The kind of practice that U2 is engaging in is part of that problem.”

Nobody from U2 was available for comment, but the band will defend their tax measures in an extensive interview to be published in this newspaper on Friday.

I always preferred it when they were parodying the whole "rich rock band" thing, not actually being it.
Posted by Neil Cameron (One Salient Oversight) at 12:40

I suppose the band in the interview will be saying EU allows one to pay tax in other countries. The band are better able to allocate their money to helping Dead Kids and Developing countries than the mediocre amounts the Irish Government sends.