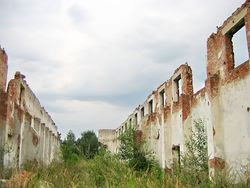 As the prime minister warned in Rome that the world was being hit by an "economic hurricane", his fightback plan at home was complicated when the Office for National Statistics raised the prospect of Britain's national debt rising to 150% of national income from its current 48%.

The ONS classified Lloyds and Royal Bank of Scotland as public corporations and thus added all their liabilities - up to £1.5tn - on to the taxpayers' balance sheet. The ONS said the recapitalisations of Royal Bank of Scotland and Lloyds Banking Group meant they had in effect become public corporations, which would have to add the full extent of their liabilities to the national debt.

The move, which the Treasury dismissed as a "technical classification" with few policy implications, prompted Tory warnings that Britain was now facing a debt crisis. Kenneth Clarke, the shadow business secretary, called on Alistair Darling, the chancellor, to introduce a dramatic reduction in the growth in public spending from this April, rather than waiting until next year.

"We are going to quite staggering levels of public debt," Clarke told the BBC. "The voters are going to have to pay the interest on all this mounting debt. "

48% is bad enough. For that to be raised to 150% of GDP is, well, staggering. I can see the same thing happening in the US as well as a result of the bailout.

All this proves one thing - governments should have been fiscally responsible in the years and decades prior to this economic crisis. Many people complained about growing debt levels and how it will come back to bite later on but they were ignored by those in power.

So what will happen?

If UK public debt gets to 150% of GDP, it will mean that public spending will be dominated by debt servicing. Last year I blogged about Italy, which has public debt of around 107% of GDP. As a result, debt servicing (paying interest on debt as well as paying back government bonds when they mature) ate up 41.2% of the budget. It also represented some 17.9% of GDP.

That's right - the amount of money the Italian government paid back in debt servicing represented 17.9% of GDP. Debt servicing outstripped education spending by 5 to 1, health spending by 22 to 1 and spending on public order by 12 to 1.

The result of huge deficits is less spending on public works. Anything that the government spends money on is crowded out by the need to service debt. If public debt does hit 150% in the UK, you can be certain that the result will be either massive cuts in education and health spending, or else substantial tax rises, or else a combination of the two.

And this goes for all countries - including the US. If the cost of Bush's bailout and Obama's stimulus pushes public debt levels beyond 100% of GDP, the cost of servicing debt and paying off the principal will choke society and the economy.

All this makes me glad to be in Australia. Even though our currency is small and is blown by the winds of international finance, at least we completely paid off our public debt. Rudd's stimulus plan is therefore much more sustainable and less likely to "mortgage the future" like the UK or the US.
Posted by One Salient Oversight at 11:57

Then I found there is actually a

There's a few misnomers around about measuring national debt.

For example, if you look at the CIA World Factbook, it says this about Australia:

note: the Commonwealth government eliminated its net debt in 2006, but continues a gross debt issue to support the market for risk-free securities (2008 est.)

So while debt in the UK may have been around since Pitt the Younger, net debt has probably been around for less than that.

But even if the UK government has been in net debt since that time, there are also a few more things to take into account.

The first is that debt is often paid off and re-issued. I can assure you that any debt incurred during Pitt the Younger's time as PM has long since been paid off.

The second is that if net debt is maintained at a static level, and if GDP grows, then the debt/GDP ratio drops. So even though the government is in debt and is not paying it off, the increasing size of the economy makes it less dangerous.

Now that you've provided me with a link to the UK debt site, I feel tempted to run a weekly "Government debt watch" for Britain too!

Your post is truly an eye opener for those who are looking for more details on Trust Deeds Scotland. As it is a hard time for all of us, I am sure your post will be a lot of help to a lot of people. Keep up the good work.