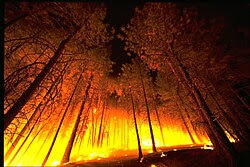 By now you would've heard the news of severe wildfires here in Australia - it is one of the top news stories around the world at the moment. So far 107 people have been confirmed dead and over 750 homes lost in Australia's greatest bushfire tragedy.

Fortunately for me and my family, we are located about 1000km (620 miles) away from this tragedy. Nevertheless we have suffered 12 days in a row of temperatures exceeding 30°C (86°F). Our grass is brown and leaves are wilting. Today is the first day of sub-30 temperatures and rain is predicted in the next few days, which is good news.

Bushfires (what Australians call wildfires) are a natural hazard. Australia is a dry continent and bushfires are a common occurrence. Our history is replete with deadly bushfires dating back to the 19th century.

One of the most important things that was discovered during the months of examination that followed was that many of the dead were found in their burnt-out cars. From this they deduced (quite rightly) that there was a greater chance of survival if people stayed with their homes rather than evacuating at the last minute.

Another important discovery was that the earlier communities were advised of danger, the more likely they were to survive. This was because people either evacuated early, or were able to prepare their houses in time to face the onslaught.

I lived in Sydney In 1994 and I clearly remember those fires. All three major highways out of Sydney were affected, leaving Sydney essentially cut off from the rest of Australia for a number of days. Ash fell onto our lawn and I even picked up a carbonised gum leaf that had obviously travelled from the fires many kilometres to our house in Merrylands (which was nowhere near the fires). I remember riding my motorbike on the raised section of the M4 motorway and glancing North, South and West and seeing huge plumes of smoke in the distance from the three fires that threatened Sydney.

And yet, despite the massive danger these fires posed, and despite all the houses destroyed, early warnings and more detailed data helped to reduce the 1994 death toll to just 4.

So it is therefore with a great sense of surprise and sadness that I learn of the deaths of so many in Victoria on Saturday. Obviously there will be a Royal Commission into what transpired in Victoria and this inquiry will expose any human error. Knowing this, though, I do suggest that a number of problems have already been exposed:
Having said all this, it is also possible that weather conditions were so severe and so unique that no amount of preparation or skill in command and control or communication could have saved the 107+ confirmed dead. In this case, the disaster is simply an uncontrollable act of nature that could not have been avoided nor mitigated. Part of me hopes that this is the case, yet the idea that bushfires - a natural Australian phenomenon - should somehow become more unpredictable and severe than normal is questionable. The human element - notably a failure in communication - is likely to be a major factor in the deaths resulting in these fires.
Posted by One Salient Oversight at 14:14

We have read about the terrible wildfires in Australia. Our prayers go out to you all in this terrible time of tragedy. We hope all the arsonists involved are swiftly caught and fully punished for their terrible crimes.

Our condolences go to the survivors, displaced people who have lost their homes and pray God greatly comforts the families and friends of those that have perished.