Take a look at this graph from The Oil Drum: 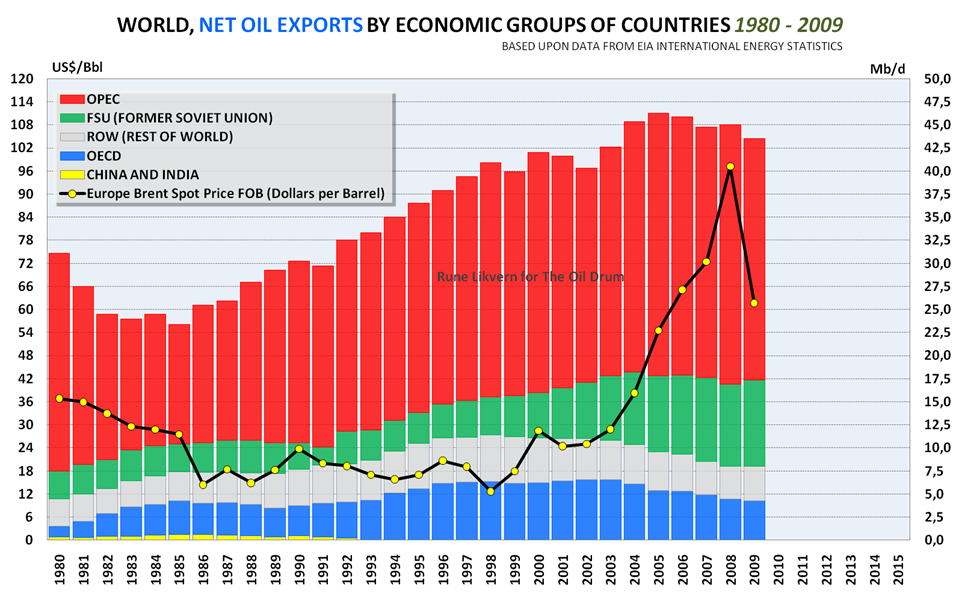 Those in the past who deny Peak Oil have tended to do one of two things. The first is to attack the actual science behind it, trying to disprove Hubbert's Curve. The second is to argue that there is plenty of slack within oil productive countries to meet demand. What the graph shows is that neither of these are true.

One of the basic tenets of economics - in fact the basic tenet - is that of supply and demand. If demand increases, so should price; if supply increases, prices should drop. What we see in this graph is that from about 2003 onwards, demand for oil was not met by supply. Despite the myriad sources of oil supply all over the world, not enough oil was produced to keep prices down. Between 2003 and 2008, prices essentially tripled. Yet over the same period, supply hardly moved.

So if Hubbert's Curve was wrong, and oil reservoirs can just keep pumping out as much oil as is needed, then why didn't oil producers simply increase production between 2003 and 2008? Moreover, why hasn't production increased since 2005?

And if there is plenty of slack for oil producers and so many new oil projects up and running to take advantage of the high price of oil (which is still historically high despite the worst recession since the 1930s), then why isn't production increasing?

This graph seems to clearly indicate that not only was the theory of Peak Oil correct, but that the peak has already occurred - in 2005.
Posted by One Salient Oversight at 13:39

Another thing to mention briefly might be long lead times. Sceptics might correctly argue that oil projects take years to ramp up and develop, and that's why the production graph is taking time to turn around. It takes *time* to respond.

If someone does that you could refer them across to my guest post at BNC which details the megaproject reviews by Skrebowski and others. Who'da'man? Skrebowski da MAN! Because basically he counts every project expected to pump over 100k barrels a day that could be coming online in the next 5 or so years, counts the existing depletion from the 54 of the 65 oil producing nations that have already peaked, and does the math.

No one has ever enjoyed the results.

Note to any readers out there: if you want to fly somewhere for that special overseas holiday, do it sooner rather than later! Many airlines are going bankrupt over the next decade, and those that survive will probably cost 4 times as much!