Recession over; recovery still in progress.

The NBER has officially called the end of the recession: June 2009.

Of course the recession is measured from peak to trough, and crawling up the other side takes time. So just how bad is it currently, now that the Germans have stopped bombing and London has begun to be rebuilt? 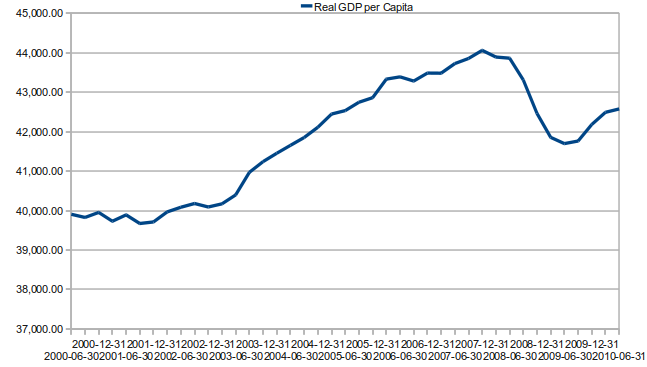 How the US performs from now on will be the real determiner of the recession's effect. While the recession was underway, many commentators (including Paul Krugman) wondered whether this would be an "L" shaped recession - a crash followed by a long period of low growth. The graph above shows the "L" beginning to form, though it may also be the beginnings of a "U" or "V".

My opinion is naturally quite negative. Total credit market debt for 2010 Q2 was 357.15% of GDP ($52.0545 Trillion), down from the peak of 374.15% ($52.5097 Trillion) in 2009 Q2 but still massively high in comparison with the rest of America's financial history. This means that much of the 30 year debt bubble accrued by US financial companies has a long way to go before it returns to normal. I can foresee very slow growth in GDP over the next few years for the US with the continual possibility of capital flight.
Posted by One Salient Oversight at 13:25