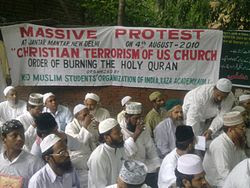 It's been a long time since I've written anything remotely theological at this blog but today I felt compelled to quickly discuss the Terry Jones Qur'an burning issue. And to be even more amazing, I am responding to something I read by my arch-nemesis Dan Phillips at Pyromaniacs, whose blog "Biblical Christianity" is often just another anti-Obama boilerplate. Surprisingly I agree with Dan on this issue:

"God is leading us right up to the moment. It's no different than Abraham and his son. God didn't tell him, 'Go right up to the point where you might sacrifice him.' He wanted him to be fully committed. We're prepared to do what we're called to do."

As a Reformed Christian, I believe the Bible clearly teaches Sola Scriptura - that the Bible contains all that Christians need to know about God, about the Christian faith, and about how to live their lives. Dan Phillips, despite his own political baggage (which means that he somehow thinks that Social welfare policies are forbidden by scripture; go figure) hits the nail right on the head at this point:

Let's be more specific: the Wayne Grudem type of Charismatics — and everyone who gives Grudem cover — "own" Pastor Jones.

How so? They give Jones cover by their desperate re-defining and Clintoning-down of the Biblical gift of prophecy. What is prophecy, to Grudem? He explains it as the errant reporting of inerrant revelation. It is precisely like the old liberal redefinition of Biblical inspiration: the writers of Scripture received inerrant inspiration from God, but they wrote it down errantly. Grudem simply transfers this to NT prophets, instead of the writers of Scripture: they give errant reporting of spontaneous inerrant revelation. The message they receive is right, but it may be garbled in transmission.

In many ways the Jones kerfuffle is no different from Christians who try to discern what special plan God has for them, while forgetting the most obvious plan of eternal life through Christ. In the end it is a reliance upon the subjective, which is interpreted and acted upon according to the amount of power that person has. If shut-in Joe Bloggs from dumpsville felt compelled to burn Qur'ans then no one would care; but a pastor with power over people in his church, that's a different issue.

So Dan Phillips is right, even though he's terribly and embarrassingly wrong on so many other issues. God can certainly speak through an Ass.
Posted by One Salient Oversight at 10:31