Where the wind blows 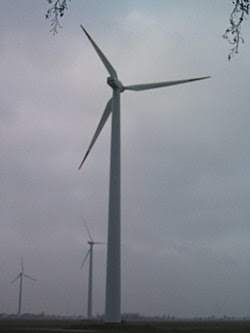 From the department of the market speaks:

Legendary Texas oil man T Boone Pickens has gone green with a plan to spend $US10 billion ($10.7 billion) to build the world's biggest wind farm. But he's not doing it out of generosity - he expects to turn a buck.

The Southern octogenarian's plans are as big as the Texas prairie, where he lives on a ranch with his horses, and entail fundamentally reworking how Americans use energy.

Next month, Pickens' company, Mesa Power, will begin buying land and ordering 2700 wind turbines that will eventually generate 4000 megawatts of electricity. This is the equivalent of building two commercial scale nuclear power plants and enough power for about 1 million homes.

"These are substantial," said Mr Pickens, speaking to students at Georgetown University yesterday. "They're big."

Posted by One Salient Oversight at 13:35

Also, the higher the wind turbine, the more wind it has access to. The bigger the blades, the less wind it needs to generate lots of electricity. The wider the area of the wind farm, the less interruption to electricity supply.

My wind page documents a few links to European companies trying to spread wind so far across the continent that it approaches baseload electricity. This is fantastic because it is one of the highest ERoEI sources of renewable energy we have... and probably beats fossil fuels now... so it could be THE highest ERoEI! And it doesn't even have to supply baseload, because a dozen other sources of local renewable electricity will back it up. Solar on rooftops, solar thermal at local powerstations, micro-hydro and others.

Then there's CETO wave power = 24 hour baseload power (and water desalinated at night when there's less electricity demand). With 60% of the world living within 40km's of the coast, CETO wave could go a long way towards supplying our power needs.

The problem is..... they produce electricity. The Export Land Model predicts we could be without a world oil market in just 9 or 10 years — so how long have we got before the means of constructing these behemoth energy systems itself "runs out" and nations worldwide are forced to rely on their domestic production? Peak oil just got teeth again.

I don't know if you're familiar with T. J. Rodgers, but this is part of a fascinating interview with him. T.J. has a PhD from Stanford in EE and is CEO of both Cypress Semiconductor and SunPower Corp. His comments regarding the different energy sources are fascinating and - even better - credible given that he knows what he's talking about (unlike certain hypocritical former VPs).