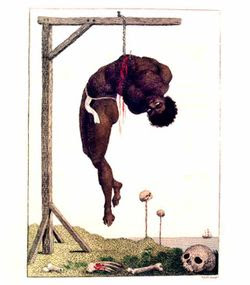 The only thing necessary for the triumph [of evil] is for good men to do nothing.

Unless, of course, the good man resorts to evil deeds in response to evil:

In dozens of top-secret talks and meetings in the White House, the most senior Bush administration officials discussed and approved specific details of how high-value al Qaeda suspects would be interrogated by the Central Intelligence Agency, sources tell ABC News.

The so-called Principals who participated in the meetings also approved the use of "combined" interrogation techniques -- using different techniques during interrogations, instead of using one method at a time -- on terrorist suspects who proved difficult to break, sources said.

Highly placed sources said a handful of top advisers signed off on how the CIA would interrogate top al Qaeda suspects -- whether they would be slapped, pushed, deprived of sleep or subjected to simulated drowning, called waterboarding.

The high-level discussions about these "enhanced interrogation techniques" were so detailed, these sources said, some of the interrogation sessions were almost choreographed -- down to the number of times CIA agents could use a specific tactic.

The advisers were members of the National Security Council's Principals Committee, a select group of senior officials who met frequently to advise President Bush on issues of national security policy.

In the past 12 months my stance against the Bush administration has not so much softened as it has not been discussed. Most of my anti-Bush, anti-Iraq War statements at this blog occurred in 2005 and 2006. Since the middle of 2007, I have focused mainly upon economic issues, probably because it was a developing area (and still is) and is more interesting.

But this recent revelation - quoted above - reminds me of the anger I still hold against the Bush administration for destroying America's reputation around the world. The fact is that the Bush administration - and Bush himself - approved the use of torture of terrorist suspects. Abu Ghraib was not some anomoly, it was the natural result of things. Stories we have heard of torture at other places, like Bagram, Guantanamo Bay and the roving CIA torture cells that walk into other countries and violate their sovereign laws by kidnapping people and taking them to places where they can be tortured for information - they are true. These stories have moved from rumours to substantiated rumours and have now gone onto documentable fact signed and sealed by those at the top of the US Administration.

Add to this the flimsy basis upon which the Iraq war was founded upon - with the deaths of over 4000 US Servicemen and probably over one million Iraqis since 2003 - and the situation seems very clear.

I'm exceptionally annoyed that impeachment of Bush and Cheney was never seriously considered. It speaks volumes of America's seriously skewed priorities that one President's lies to protect adultery was grounds for the first and only impeachment trial of the 20th century while the invasion and conquest of another nation (which was unconstitutional in the first place) that results in the deaths of over one million people, the economic and social ruin of tens of millions of others did not so much as get looked at in Congress.

Bush, Cheney and his gang may not escape impeachment, but it is in the interests of American and the entire world for these people to be tried as war criminals, with immunity granted to those in the lower echelons so that they may testify about what they saw and heard - these lower echelons being those who actually created the procedures and participated in them.

But, then again, I wouldn't hold any hopes high for such a process to happen. If only Bush, post-president, were kidnapped and extraordinarily rendered to Europe to face the International Criminal Court - that would be justice.

In order for evil to triumph, it is not just necessary for good people to do nothing... it is also for evil people to get into positions of power and abuse them in the name of good.

And to think that Bush - and Ashcroft - publicly declare faith in Christ. Abomination.

PS - Thanks to Tom Hinkle for setting me off on this.
Posted by One Salient Oversight at 17:44

I really want to respond to this, in word and thought, at length.

It may make me sound like a monster, but I really don't know how I feel about torture. You've given me impetus for thought, though.

(The fundamental problem: I don't know that I could remain sane as a soldier, yet I believe war is sometimes a sad necessity and Biblically justifiable. So the whole subject is personally horrific, yet philosophically open.)

I forgot to mention--I want to respond to this, but will not have the time or effort, probably for weeks.