From the department of confusion:

Oil was little changed in New York after touching a record $112.21 a barrel yesterday following an unexpected decline in U.S. crude supplies.

The 3.1 million-barrel drop in crude-oil stockpiles reported by the Energy Department sent the price up as much as 3.4 percent yesterday. Gasoline futures jumped as much as 2.6 percent to their highest ever.

Love that last line - who says economics isn't based on emotions? However, the fly in the ointment, the bear in the room, the imperial stormtrooper in the public toilet, are these graphs from The Oil Drum: 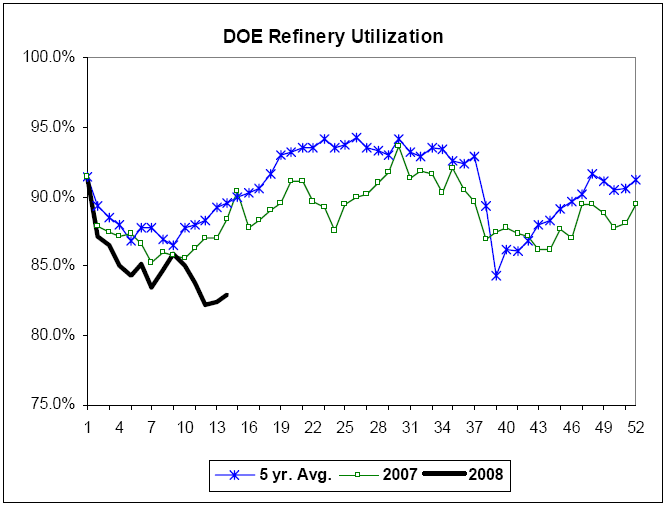 What this shows is just how busy US refineries are. Notice anything about the big black line? That's 2008. It shows that, on average, US refineries are not as busy as they were anytime in the last 5 years. Now, have a look at this graph: 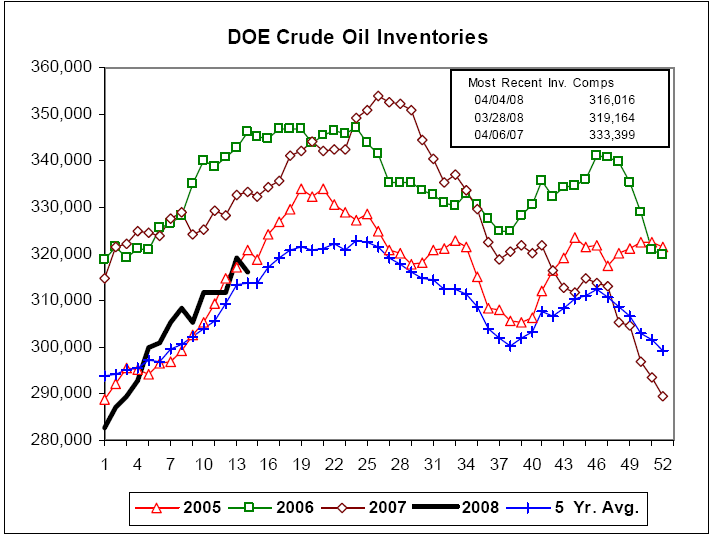 Again, the big black line is 2008. So while crude oil inventories are pretty much equivalent to the 5 year average, the inventories have dropped considerably since 2006 and 2007.

So, on the one hand, refineries are not as busy as they once were, while inventories have dropped in the last 2 years.

When prices of any commodity - any good or service - goes beyond what the market wishes to pay then the result is "demand destruction". Higher oil prices have led Americans to begin consuming less oil - yet the price of oil has spiked to its highest level yet on yesterday's inventory result: $112 per barrel.

One theory is that the market has gone all screwy and doesn't know whether down is up. While that may seem like a good explanation, I think supply is the issue.

Yes, Americans are using less oil - the refineries have slowed somewhat because demand for gasoline, heating oil and other liquid products has dropped. But it also seems as though supply has fallen too, that while inventories are close to their five year average, they have also plummeted considerably in the last 2 years.

So what happens if the supply of oil drops more than demand drops? More idle refineries, lower oil stocks and higher oil prices. Sounds like what is happening here.

And why is supply dropping? Probably because we've peaked.

Posted by One Salient Oversight at 14:28

Shouldn't that be "Hubbert bubble, oil's in trouble"? Nice inter textual reference though.

How do you think the Export Land Model affects our chances of adapting to peak oil?