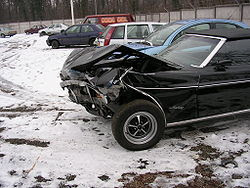 Calculated Risk has the lowdown here. Basically the problem is "commercial paper" and the spread between high and low quality versions of it.

So far we've had two major market "corrections" in the last 12 months, both matching increases in the spread of commercial paper. A third one has just recently developed, which means that there is a chance that another market correction is probably due, with the resultant actions by the Fed to try to calm everything down.

I won't claim this as a prediction simply because CR are the ones making it. I just happen to believe them.
Posted by One Salient Oversight at 13:47