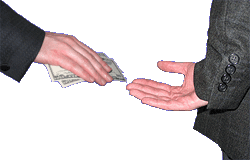 From the department of Wartime Propaganda:

To the public, these men are members of a familiar fraternity, presented tens of thousands of times on television and radio as “military analysts” whose long service has equipped them to give authoritative and unfettered judgments about the most pressing issues of the post-Sept. 11 world.

Hidden behind that appearance of objectivity, though, is a Pentagon information apparatus that has used those analysts in a campaign to generate favorable news coverage of the administration’s wartime performance, an examination by The New York Times has found.

The effort, which began with the buildup to the Iraq war and continues to this day, has sought to exploit ideological and military allegiances, and also a powerful financial dynamic: Most of the analysts have ties to military contractors vested in the very war policies they are asked to assess on air.

I can't explain how vindicated I feel about this report from the New York Times, yet I fear that this will again be ignored by those who should know better.

Essentially it goes like this - the Pentagon, under orders from the Bush administration, got together retired military experts, briefed them regularly, and then watched as they turned up as talking heads on every major news network defending what was going on in Iraq. Moreover, many of these "experts" are also board members of, and/or lobbyists for, defense contracting companies who profit from war. This is shameful, and it confirms a number of different things:

1) The Bush administration lied about the war.
2) The Bush administration let Americans and Iraqis die in order to serve their political ends.
3) The upper echelons of high ranking American servicemen are riddled with political corruption.
4) The military-industrial complex - in which industries that profit from war encourage its escalation - is real.
4) The media is not biased towards the left wing, but the right wing.
5) Conservatives swallowed this bull because they're not objective, can't think properly and suffer from cognitive dissonance.
6) Anti-war lefties who opposed the war from the very beginning and who argued that the Bush administration was orchestrating a sophisticated propaganda campaign to promote the war and lie to the American people were not crazy moonbats but actually well informed thinkers who merely reacted to the facts as they saw presented to them.
7) Pro-war conservatives will read this New York Times report and dismiss it as lies propagated by the left-wing media.

To my mind, people who still support the Iraq War are not only morally vacant, but intellectually vapid as well. They do not deserve respect or the time of day. They have descended into the valley of flat-earthers, and UFOlogists, but are more of a danger to society than these goons ever will be. In a sense, Iraq war supporters give flat-earthers and UFO goons a bad name.

Posted by One Salient Oversight at 13:29

That's the way I feel about Doomsday global warming alarmists.

I've no idea if that is true and I wonder whether any data exists to support your opinion. But I was referring to those who - despite all scientific evidence - insist all the worst case scenarios are bound to happen.

I'm skeptical of those, yet I also opposed the Iraq war. Would you consider someone like me to be one of those weak-minded people you referred to?

BTW, if people tend to disbelieve the NY Times these days, the Times have no one to blame but themselves. They have largely squandered what was once a great franchise, and it's a pity.

and the people said - amen.