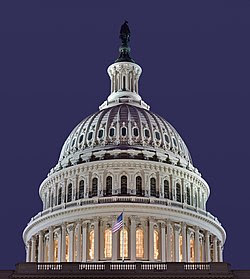 A reply to Two Dogs, who argues strongly that the Constitution restricts the Federal Government to national defense only and exclusively.

Naturally I think you're wrong TD. And here's why:

The Congress shall have power To lay and collect Taxes, Duties, Imposts and Excises, to pay the Debts and provide for the common Defence and general Welfare of the United States.

Tax in order to provide for the General Welfare?

The Constitution does not give any explicit limit to what the government can spend its money on. Nor does it give any limit to the amount of tax revenue it can raise. Nor does it explicitly (or implicitly) support the notion of "small government".

The Congress shall have power to lay and collect taxes on incomes, from whatever source derived, without apportionment among the several States, and without regard to any census or enumeration.

What? Nothing there about what congress is not allowed to spend money on? Why? Perhaps because the framers of the constitution expected the government to spend money in order to provide for the common welfare!

The Fed is there for one purpose, to protect the citizens of this country

yet the constitution actually says:

We the People of the United States, in Order to form a more perfect Union, establish Justice, insure domestic Tranquility, provide for the common defence, promote the general Welfare, and secure the Blessings of Liberty to ourselves and our Posterity, do ordain and establish this Constitution for the United States of America.

The writers of the constitution did not limit it just to "the common defence".

But, of course, is this an "originalist" interpretation? Why not check out the Federalist papers on this?

Federalist Paper 30 starts off with:

IT HAS been already observed that the federal government ought to possess the power of providing for the support of the national forces; in which proposition was intended to be included the expense of raising troops, of building and equipping fleets, and all other expenses in any wise connected with military arrangements and operations. But these are not the only objects to which the jurisdiction of the Union, in respect to revenue, must necessarily be empowered to extend. It must embrace a provision for the support of the national civil list; for the payment of the national debts contracted, or that may be contracted; and, in general, for all those matters which will call for disbursements out of the national treasury. The conclusion is, that there must be interwoven, in the frame of the government, a general power of taxation, in one shape or another.

All this disproves the notion that the constitution limits the federal government to spending on national defence only and exclusively. Rather, it proves that congress may raise taxes and increase revenue in order to promote general welfare and institute domestic tranquillity.
Posted by One Salient Oversight at 10:06

The first sentence is incorrect in your post. I argue rightfully that the protection of the citizens of our country is the ONLY responsibility of the federal government. This is not simply military as is discussed in my post.

And I also responded to ask your opinion of General Welfare and why you failed to mention that the Tenth Amendment states specifically that anything not enumerated in the Constitution nor given to the Fed by the states, is the sole responsibility of the states.

This is a very easy concept for someone to understand that is knowledgeable in the ideology of individual rights, which is the basic philosophical principle upon which the United States was founded.

Thanks for your visit. Hopefully, I can help you to understand more about freedom.

General Welfare is to be defined apart from common defence because the writers of the constitution wrote two different things.

Common defence - that's what you say the constitution only defines.

General Welfare - that's what you say the constitution doesn't say.

I would define general welfare as laws or spending bills that make America better for its citizens.

10th amendment doesn't apply because "General welfare" is already present in article 8 and the preamble.

The use of the Federalist paper is to show that an originalist reading of the constitution shows that the federal government has the right to tax and spend on areas not defined as defence.

Moreover - if common defence is all the Federal government does... then why the need to elect representatives and senators? Under the "common defence only" model, they would do nothing except the occasional spending bill for the military.

The 1st congress passed the Census act of 1790. Where does that fit into "common defence only"?

The Federal government builds a road.

Hmmm. Have to side with OSO here, Two Dogs. Enough of the founding fathers were still around to prove your hypothesis wrong by enacting spending for the 'general welfare.'

Hamilton and crew were Federalists right from the beginning. At least half of the founding fathers saw the federal government's position as FAR more than just providing protection from our enemies. The 'general welfare,' by the founding father's later decisions to spend money on roadbuilding etc, is clearly anything that strengthens the union of the states by creating commonalities.

Roland, reading comprehension is NOT your forte.

What I find amazing is that your interpretation of the Constitution is such that even legislation passed by early congresses would be unconstitutional by your standards.

I can just imagine you going back in time and lecturing the early congresses for being unconstitutional when some of them wrote the darn thing in the first place.

They built a road! Using public money! But Two Dogs in 2009 is more enlightened than they!