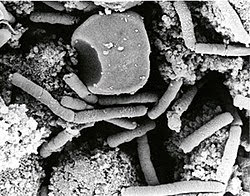 With the F.B.I. preparing to close the case, The New York Times has taken the deepest look so far at the investigation, speaking to dozens of Dr. Ivins’s colleagues and friends, reading hundreds of his e-mail messages, interviewing former bureau investigators and anthrax experts, reviewing court records, and obtaining, for the first time, police reports on his suicide in July, including a lengthy recorded interview with his wife.

That examination found that unless new evidence were to surface, the enormous public investment in the case would appear to have yielded nothing more persuasive than a strong hunch, based on a pattern of damning circumstances, that Dr. Ivins was the perpetrator.

Focused for years on the wrong man, the bureau missed ample clues that Dr. Ivins deserved a closer look. Only after a change of leadership nearly five years after the attacks did the bureau more fully look into Dr. Ivins’s activities. That delay, and his death, may have put a more definitive outcome out of reach.

Brad Garrett, a respected F.B.I. veteran who helped early in the case before his retirement, said logic and evidence point to Dr. Ivins as the most likely perpetrator.

It's that second paragraph that is important. While Ivins seemed the most likely candidate and a series of circumstantial evidence pointed to this, Ivins could've simply been the wrong man in the wrong place: there was nothing that tied the guy directly to the crimes.

It's sad, but when a person is accused of a crime they did not commit, their subsequent behaviour can quite often appear to show a level of guilt. Ivins certainly acted as though he was guilty after he became a suspect... but then so did another suspect, Stephen Hatfill, who was subsequently exonerated for any involvement in the case.

The article shows just how unprofessional the FBI was in the early days of the case and how mistakes were made. I'm no conspiracy theorist (I don't think the Anthrax attacks were some secret attack on the US by its own government) but I do think that there is enough doubt on Ivins as a suspect - there is every possibility that another person did it and was able to cover his/her tracks in the years after the attacks took place (when the FBI was prevaricating).