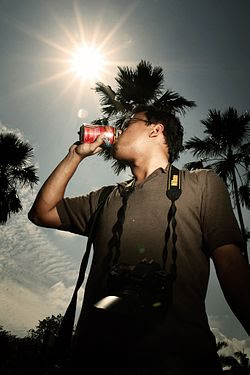 The heatwave arrived with a vengeance yesterday with temperatures hitting the sizzling mid-40s in parts of the state, well above the predicted high of 41, while Melburnians sweltered in a 43.2-degree heat.

The highest temperatures were recorded in Nhill and Hopetoun in the north-west of the state where the towns and surrounds baked in a maximum of 45 degrees at 3pm.

Australia is a hot, dry country so such extreme temperatures are not unusual. What is unusual is that they are likely to continue until the weekend. Hot weather in Southern and South-Eastern Australia is usually due to a low pressure system moving Eastward through the Bight and out through Bass Strait. What is unusual about this situation is that a large High Pressure system between Australia and New Zealand is keeping a series of lows from moving. In layman's terms this means that winds from central Australia - which are hot and dry - are blowing over Melbourne and Adelaide and heating them up over a much longer period of time (4-5 days) than what is normal (2-3 days). This is why the heat is lasting longer and not dropping sooner.

Heatwaves also cause heat-related deaths and, while Australia is no exception, Australians are used to the demands of hot weather. Hopefully this means that the physically weaker people in society (the elderly and very young children) are likely to be looked after (air conditioning, plenty of fluids). The conditions are so unusual, however, that an increase in deaths is likely in the next few days.

The problem occurs, however, when such weather conditions begin to occur on a more regular basis. If we start having once-in-a-century weather events like this every couple of years, then it means that something has changed in the world's climate patterns and global warming can certainly be seen as a possible cause.

On the other hand, global warming or not, these freak weather conditions may just be what they are - simply freakish and unusual. That is probably the most likely explanation.

Fortunately for me, I am located on the East Coast of Australia. The weather system that is causing such problems in Melbourne and Adelaide is not affecting Sydney and Newcastle in the same way. It'll probably reach 31°C (87.8°F) here today - unpleasant for yours truly but nothing unusual for this time of year.
Posted by One Salient Oversight at 08:09