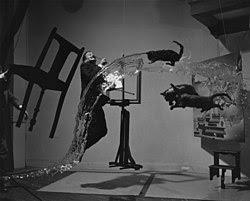 I was walking around the shops today. Here in Australia it is school holidays and the temperature is rising, so I saw lots of school kids and their parents and lots of traffic.

I went to Westfield Kotara, ostensibly to purchase a mobile phone battery but maybe also some DVDs to add to my collection (I eventually bought two Akira Kurosawa films - Rashomon and Dersu Uzala).

Walking the length and breadth of the shopping centre gave a surreal feeling that all was well. People were bustling around and Novacastrians were happily consuming products. Eventually I found somewhere which sold phone batteries and saw about 30 different types of battery. Why so many? Wouldn't it be better to have an industry standard to cut costs?

I thanked the man who served me and wondered if he would have a job in 12 months time. As I walked I saw people working in newsagents, electronics stores, bookshops, donut shops, women's fashion shops. I even walked past a 50-ish woman walking on a treadmill. Will these people have jobs in 12 months?

The Reserve Bank of Australia cut interest rates today by 100 basis points - from 7.0 to 6.0 percent. It made international headlines apparently. Channel 7 had its experts out immediately, discussing the ramifications of such a move. Finally the credit crunch was starting to impact Australia, and David Koch spent time discussing how Australia was a different case because of the 14 top rated (AA) banks in the world, 4 of them are Australian.

I was surprised to learn a few weeks ago that Australia's banks do not have the same government protection granted to deposits that other banks have. Yet the "vibe" I have been getting the last few weeks is that Australian banks are somehow better regulated which means that the things happening in America, Britain, Europe and Iceland just won't happen here. Of course I will believe that only when I see it, as this sort of belief could quite easily be a form of Aussie exceptionalism.

But then again, the market is in a state of confusion at the moment. While "Koshie" and other Australian financial commentators trotted out the usual "home owners will pay less for the mortgages but retired people on fixed incomes will get less" in response to the interest rate cut and the usual "exporters will benefit, importers won't" sayings in response to the dollar drop, the fact is that no one really knows what exactly will happen. Who knew that Iceland would suffer from capital flight? Will Australia be next?

Today's interest rate drop will certainly help a friend of mine who has been financially stressed in the last few weeks. The credit crunch is hitting him too. I'm personally glad that my wife and I agreed to put off buying a house and getting a mortgage - in hindsight it has reduced our stress levels in the current clime. In fact, our household has no net debt to speak of, which is amazing considering the fact that I am chronically underemployed. We also got our tax return the other day, which was why I was able to justify buying some DVDs today.

To be honest, the reason I and my family are in a rather good fiscal situation is not due to design but luck. Sadly, there are now literally millions of people and families around the world who are not so lucky - whose mortgages are in danger of foreclosure, whose bank accounts are in danger of disappearing, and whose relationships are being badly strained... some permanently, and some even fatally.

Many of the people I walked past today are likely to be in a rather unlucky situation soon. I believe many will lose their jobs, including the man who couldn't sell me a phone battery and the young woman at the DVD shop with too much foundation on her face. The woman with the too-short skirt who walked up the stairs in front of me at Borders - will she be back there to buy more in 12 months time?

It's all too easy to look at GDP figures and unemployment reports and cliffdiving stock prices without realising the human impact of such events. What was surreal today was that I felt like the kid from The Sixth Sense, except that instead of seeing dead people I was seeing sad, desperate people from the future walking around in the present, oblivious to their fate.
Posted by One Salient Oversight at 23:53