America has no room for fiscal deficits 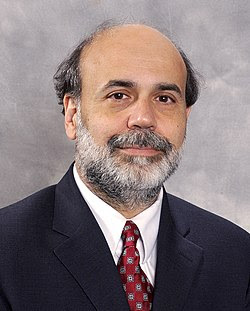 Wall Street rose more than 4 per cent overnight after US Federal Reserve chairman Ben Bernanke supported the implementation of another US Government stimulus package.

Dr Bernanke told a US Congressional committee that it should consider measures to help improve access to credit by consumers, businesses, and other borrowers, as the North American economy faces a protracted slowdown.

This is precisely the area that I differ with in regards to other econ-bloggers. A month ago I argued that the time had come to follow The Washington Consensus. This called for nations that in economic trouble to enact "fiscal policy discipline".

It's not as though I reject Keynesian policy at this point - in fact, I think the idea of running a deficit during hard economic times is an essential activity, all things being equal. The problem with this in America's case is that things are not equal.

It is popular for many econ-bloggers to remind us all of Hoover's mistake. Faced with the biggest economic collapse in history, Hoover exacerbated the situation by insisting on tax rises and spending cuts to ensure that the US government ran a balanced budget. At the same time, the Federal Reserve kept interest rates too high, making the situation even worse.

Thus, the logic goes, insisting on fiscal discipline during a recession is deadly. Paul Krugman thinks so, as does Ben Bernanke.

Well, allow me to disagree with the Nobel Laureate and the Reserve Chairman.

The second problem that faces the US now is that public debt is already way too high. $6.06 Trillion in federal government debt is owed to the public - around 44% of GDP (and likely to get higher as the bailout, reduced tax revenue and contraction in GDP will increase that percentage).

Again, let me say that I am not against running deficits during recessions in ordinary circumstances. Hoover's decision to balance the budget was a wrong one, to be sure, as was ultra-tight monetary policy from the Fed in the 1930s as well.

But what I am saying is that the circumstances that the US is in today - namely already huge levels of public debt and a dependence upon foreign investors - makes the current economic crisis even worse. The fact that the US government already has unsustainable amounts of debt (due to a combination of Reagan and GW Bush) allows little, if any, room to move.

I have pointed out in earlier posts the danger of capital flight - when foreign investors flee from a country and, in the process, crash the currency. This happened to Russia and many Asian countries in the mid-late 1990s and the result for them was horrible. I vaguely remember the Russian central bank lifting rates to 100%.

If the US should increase its level of net government debt, the danger of capital flight will be increased markedly. There is every reason to believe that foreign investors' love affair with the US dollar might come to a sticky and bloody end if the US continues to borrow money to boost consumption.

Many might argue, however, that the US Dollar is too big to fall. The US Dollar is, after all, the world's reserve currency. All I can say to that is to look at the example of Enron or Lehman Brothers or Washington Mutual - huge companies that were in the top 30 biggest companies in the US. If these big companies can go bankrupt and collapse, then it stands to reason that international investors may eventually raise the level of risk associated with investing in the US, causing the Dollar to drop in response.

I have to say that too many American economists have been blinded by their Americocentricity - they have lived and studied so long within the US "bubble" that they are unable and/or unwilling to step outside of it and see the bigger picture. This is why Krugman and Bernanke - amongst others - are arguing so vociferously for more stimulus programs and bigger deficits. The fact is that they can't see how public debt levels are already unsustainable and the danger this poses both in terms of future fiscal restraint and US dollar values.

If capital flight does occur and the US dollar does crash, the result will be disastrous - what I often refer to as "financial armageddon". If you think the problems of the present are bad enough, they will be made 100% worse if the US dollar crashes.

Let me finish off here with a market example.

Let's say that Widgets Banking Corp, a nondescript but medium-sized efficient US bank, decides to purge itself of its debts, lay off half of its staff and cut costs. What would this do to its share price? Investors, seeing that the company has taken steps to minimise its losses, would reward this effort with higher share prices.

In the same way, if the US government made steps to purge itself of debts by slashing costs and increasing its revenue stream, international investors in the US Dollar would react by valuing the currency even more.

You see, the problem is that traditional Keynesian thinking has the government acting within a closed economic system. The problem is that the system is open. If the US government goes ahead with Bernanke's advice and runs even bigger deficits to boost consumption, the result is likely to be capital flight.

Frying pans and fire come to mind here.
Posted by One Salient Oversight at 09:04

I think some aspects of the fiscal emergency you describe may be more urgent than we have thought. Check out this puppy ...

*** begin quote ***
Pimco’s Total Return Fund, the world’s largest bond fund, raised its holdings of mortgage-backed securities to 79% by the end of September, a level not seen since at least June 2000, from 69% a month earlier, according to data from the company’s web site.

In contrast, Pimco continued to snub U.S. government debt, reducing its holdings for the ninth straight month, even though Treasurys have benefited over the past couple of months from massive safe-haven flows.
*** end quote ***

Did Bill Gross continue to soak up agencies in October, with foreign central banks dumping historic amounts of the stuff? He certainly didn't have much remaining room to do this.

That line about a "closed economic system" really, really interests me.

Imagine my "world currency" and "World Federation" guys win and the entire globe has, maybe, an EU styled Federal government with a "Terran" currency.

Would that mean Keynesian thinking was back?

Or... what model would better describe such a situation?