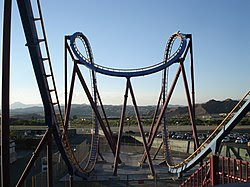 U.S. stocks staged the biggest rally in seven decades on a government plan to buy stakes in banks and a Federal Reserve-led push to flood the global financial system with dollars.

``The worst of the immediate danger is past,'' said Bruce McCain, chief investment strategist at Key Private Bank in Cleveland, which manages $30 billion. ``It's always easier when you've got markets going up and you're not having to talk clients back in off the ledge.''

I don't know who this Bruce McCain is but his words might just come back and bite him so hard on the bum that he won't be able to sit down on his financial seat.

Volatility is the key here. This incredible market rally is a result not of certainty, but uncertainty. I would prefer a week where the market advanced or contracted not more than 0.5% per day. That sort of behaviour would indicate a return to normalcy, not a financial roller coaster ride.

The reality is that the US economy is still contracting, unemployment will continue to grow and houses will continue to foreclose. Today's rally does not presage a return to normalcy, nor does it indicate that the worst is over.
Posted by One Salient Oversight at 09:15

I've reposted this here. With things so crazy up here, perspective from a distance is appreciated.

If we assume the Dow 13,000 was way overvalued, and assume that the low point from last week was somewhat undervalued at 8,400, then (I hope) the real value is somewhere in between. So the market may recover and climb to, say, 10,000.

But what supports the value is the ability and desire of buyers to buy stuff. Even if the "fundamentals" have a solid value of 10,000, that will not help if people can't buy the stuff they make.

So I wonder if the collapse of Main Street (who haven't been well for quite some time now) will defeat any attempt by government to make the market live again. In fact, taking taxpayer's dollars to prop up the market may further bleed Main Street and make it even harder to do anything for Wall Street.

Am I missing something here? This seems obvious to me, but the people on this and our companion blog are smarties and surely wouldn't miss something this fundamental.

I think Bill Moyers Journal hit the nail on the head when it described the fact that America has become an "Empire of Consumption"... and that the entire USA economy switched around the 1970s from the old modus operandi of being an "Empire of Production".

In other words, the whole "sub-prime" hedge fund fiasco, blown out debt, and fighting a war on 2 fronts is just the start. The whole basis of the American economy has to change, and it has to begin with 2 nearly impossible changes:
a/ getting off the oil, and
b/ American's living within their means.

a/ is scientifically extremely challenging, and b/ is politically impossible.

Welcome to the end of empire.